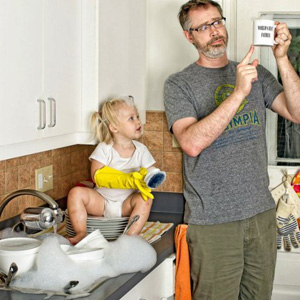 Whether he’s standing on his toddler’s head to change a light bulb or sitting idly by as she mows the lawn, Dave Engledow is the “World’s Best Dad.” At least that’s what his coffee mug says.

The Maryland-based dad of now-21-month-old Alice Bee has created a hilarious photo collection that pokes fun at the distracted dad stereotype.

“The character I portray in this series is intended to be a parody of the father I hope I never become – distracted, self-absorbed, neglectful, clueless or even occasionally overbearing,” Engledow says on his Kickstarter page (where he recently raised enough funds to turn his images into a 2013 calendar).

His satirical take on fatherhood started out as way to chronicle his daughter’s growth. Like most parents, Engledow wanted to post photos on Facebook for his family and friends to see adorable Alice grow. But he wanted to be different – and, well, a little less trite.

Now, the images have gone viral and the blogosphere is buzzing.

This dad’s creative approach to the “new dad” stereotype has received tons of praise. On the Huffington Post, ravenslvr writes, “These are very cute. I love seeing active and hands-on parents, especially fathers. Society bashes them so much, that when you have good dads, it’s almost a shock, when it shouldn’t be. I love these pics and hope he puts out many more.”

Alice Bee was just 8 weeks old when Engledow decided to photograph the two of them. His first photo showcases Engledow in a state of new-dad frenzy – sleep-deprived and clutching his baby like a football while pouring milk from her bottle into his coffee mug – the one that reads, “World’s Best Dad” (and has since appeared in every single shot).

From arm wrestling with his little girl to sitting side-by-side eating chocolate Easter bunnies (naturally, he’s chewing off the ears before she can get to them), these ingenious photos showcase dad and his tot in a bunch of hilarious scenarios. But dad insists that little Alice Bee is safe and happy in every shot, which are created with the help of Photoshop.

While these pix are highly entertaining, they also make one heck of a statement about dads. They’re not satisfied with sitting on the sidelines as mom handles all the baby duties. They’re not clueless – like too many commercials and primetime television shows can still make them appear (Guys with Kids, anyone?).

Dads like Dave Engledow rock. And someday, when Alice Bee is grown, she’ll have an amazing scrapbook filled with humorous memories of her and daddy.