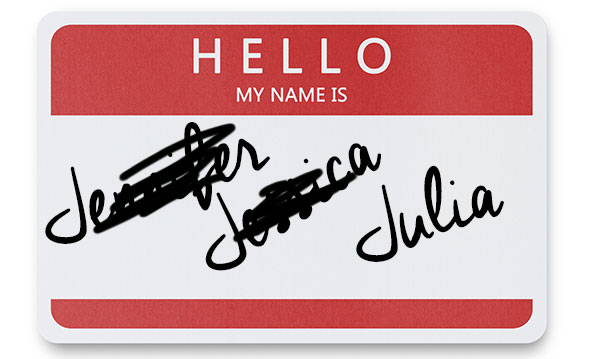 As some of you may know from reading my December 2016 story in our print magazine, I am expecting my first child in April 2017. I already have a name picked out for my son and don’t plan to change it when he makes his grand debut.

Which is why I find it sort of insane that one mom is having such a hard time sticking to a name for her child. Such a hard time, in fact, that she’s changed her daughter’s name three times in the last 18 months, Huffington Post UK reports.

We learned about this mom a couple weeks after her husband took to Reddit to explain the situation – and get advice from fellow Reddit users.

The Stir notes HuffPost Parents says the mom changed the baby’s name after three months because it was too “common” – but the other name choice didn’t sound right either so she wanted to change it again.

In his Reddit post, Dad went on to say his wife knows it’s not possible to change the baby’s legal name, but she wants a new name to call her daughter anyway.

Some commenters, The Stir reports, basically told the dad to put his foot down. “Just say no,” punch_dance says. “She can’t keep changing a kid’s name. It is going to confuse the heck out of the kid when she starts school. Tell your wife no, her name is A. She can have all the pet names she wants but it should be clear what her legal and definitive name is.”

Other commenters are a little more laid back about dad’s dilemma, saying they couple can call their daughter a bunch of nicknames.

Here’s the thing: Nicknames are fine, but a kid has to know what his or her real name is. What if she gets lost and then someone asks her what her name is and she can’t say because she’s still not clear on that detail? By 18 months old, she should be able to recognize her name, but if mom keeps changing it, she’s going to be confused.

What do you think of this mom who can’t decide her baby’s name? Tell us in the comments section.