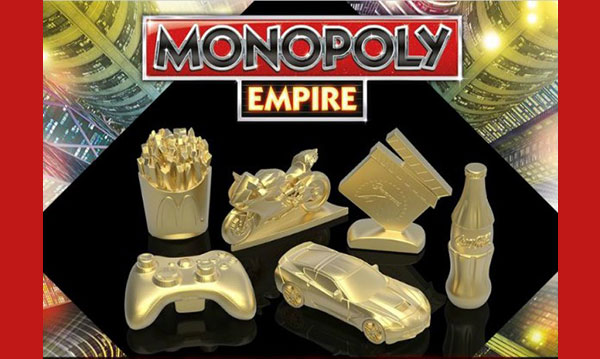 Remember those summer days you spent playing hour after hour of Monopoly as a kid? We do too! But now, if you’d rather not have a board-game marathon, Hasbro has launched a new version that is geared at kids ages 8 and up – and can be played in under a half hour.

And there’s more: The Monopoly Empire game “iconic” name-brand tokens like an Xbox controller or an order of McDonald’s fries. To boot, Empire spaces are filled with brands like Coca-Cola, Samsung, Nerf, eBay, Fender, Nestle and more.

The goal is to “Own the World’s Top Brands,” as the box touts – and watch as the “empire towers” rise and fall.

That seems to be the buzz phrase – and trend. Toy manufacturers have been updating products to fit into children’s lives that are busy with other activities, from soccer practice to dance lessons. Recently, Hasbro also released Scrabble Flash, which can be played in a scant two minutes and 30 seconds.

Which isn’t going over entirely smoothly. Yesterday, a Chicago Tribune opinion piece bemoaned, “What is the world coming to? First Hasbro retired the iron token and replaced it with a cat. Now it’s truncating the classic board game to appeal to overscheduled kids with short attention spans.”

It’s important to note that Monopoly Empire is not replacing the original game, but rather, following the fad of updating or creating toys that are geared toward children with less time – or who perhaps have a harder time focusing on an hours-long game.

Jail or no jail?

As it turns out, Hasbro has not removed jail from the new version of monopoly – as was reported earlier. A Hasbro representative told Fast Company that the new game does indeed have a jail space.

Good thing – considering social network users were in an uproar at the report of the jail space being eliminated.

It seems not everyone is hyped up for the new version of Monopoly. Internet users have been voicing their opinions, too.

According to Metro, another Twitter user, Ricardo Finland chimed in: “Gotta save an original version of Monopoly so I can raise my kids the right way.”

And, on the Metro article, Facebook user Evil-Matt Rose commented, “Family time is a blessing, not a punishment to be rushed through.”

Luckily, you can still purchase the original Monopoly – or pick up the new Monopoly Empire if your schedule only allows for a “snackable” version of the game.