New York City Shaming Teens into Not Getting Pregnant 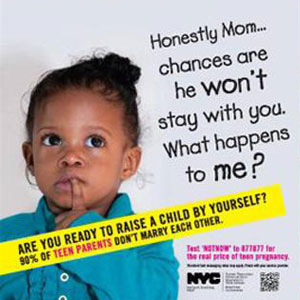 If for some reason you took a trip to the Big Apple this week, you would see an ad at the bus stop that questions, "Honestly, Mom …. Chances are he won't stay with you. What happens to me?" Or one with a crying child that declares, "I'm twice as likely not to graduate high school because you had me as a teen."

On March 4, New York City Mayor Michael Bloomberg's office launched a citywide ad campaign to prevent teen pregnancy. The ads are "asking teens to take an honest look at some of the realities of parenthood they may not have considered," Bloomberg said in a press release.

"This campaign makes very clear to young people that there's a lot at stake when it comes to deciding to raise a child," Bloomberg said in the release.

He added, "By focusing on responsibility and the importance of education, employment and family in providing children with the emotional and financial support they need, we'll let thousands of young New Yorkers know that waiting to becoming a parent could be the best decision they ever make."

The ads – featured in the subway and at bus stops throughout the city – have interactive text features for a YouTube video, "facts, games and quizzes," the release notes.

Although the announcement from Bloomberg's office notes the city's teen pregnancy rate decreased by 27 percent in the last 10 years, "there are still more than 20,000 teen pregnancies annually, 87 percent of which are unintended and mostly involve unmarried parents," it notes.

Maybe intentions are good, but some simply don't agree with the audacious ads – including Planned Parenthood. In a New York Daily News blog article, Haydee Morales, the vice president of education and training for the group, argued that the campaign "creates stigma, hostility and negative public opinions about teen pregnancy and parenthood rather than offering alternative aspirations for young people."

She added, "Teenage parenthood is simply not the disastrous and life-compromising event these ads portray. It's time we focus on the root causes rather than point fingers at teen parents and their children."

Others are reacting, too, with mixed reactions.

"I love the campaign, but I'm not 100% sure that I agree with the YOU MUST BE MARRIED BEFORE YOU HAVE KIDS thing," user IS1989 commented on a CBS News article. "Sure, statistically speaking, teen parents don't stay together, but half of all marriages end in divorce. Being married before having kids doesn't guarantee that you will stay married (at least not for the right reasons)."

LavMenace, a commenter on a ColorLines article, suggested teen moms take it upon themselves to start the conversation.

"One thing that cannot be denied is that these posters are telling the truth," LavMenace wrote. "But what is more effective than these posters is to have young teen mothers tell teen girls who are considering having a baby what it is really like to have a child so young."

Although some could argue for or against the bold posters, the city notes its intention is to "increase awareness of the consequences of early pregnancy."

"We cannot dictate how people live their lives," NYC human resources commissioner Robert Doar said in the city's release, "and sometimes even the best plans don't work out. But we must encourage responsibility and send the right message, especially to young people."