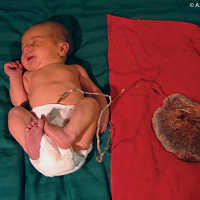 You’ve heard of parents eating their baby’s placenta, right? Well, what about keeping the organ, umbilical cord and all, around for a few days – still attached to your little bundle? You bet, say some parents who are embracing “lotus birthing.”

They skip the routine clamping and cutting baby’s cord, instead letting it dry up and fall off naturally (usually in two or three days). Meanwhile, the once-life-sustaining placenta is nearby, just chilling in a bowl or swaddled in a special cloth (the cord often gets wrapped in satin ribbon).

Bizarre? Maybe. But supporters of “non-severance” point to payoffs. Some argue that the protective cushion, which compacts to about 7-by-7 inches, still offers a newborn nutrient-rich blood and hormones. Other benefits may range from quicker cord-stump healing to lower chances of breastfeeding jaundice – even healthier weight gain and a pristine bellybutton.

But, deeper than that, folks like Texan Mary Ceallaigh, the Austin yogini and midwife behind LotusFertility.com, say this old-school practice – which has roots in Indonesia and American pioneer history and experienced a yoga-minded U.S. revival starting in the ’80s – results in a healthier, more relaxed newborn.

“Lotus babies are simply undiminished by stress in a very stressful culture,” she says on her site – and that carries on with them in life.

Learn how to care for your baby’s standard-cut umbilical cord until it falls off.

Ribbons or no, having that alien-like placenta – a “hearty, complex and dense cake,” as Ceallaigh describes it (some say it resembles the lacy veins of a lotus flower, hence the moniker) – loitering around for up to 10 days is a definite skeeve-out for some. Herbs and sea salts offer odor control, proponents say; it’s also cleaned off, and infections are reportedly rare.

What’s the medical community think? Still more common in home births and birthing centers, full-on lotus is so fringy, there’s not a ton of research. Though a Journal of the American Medical Association report found delaying cord cutting by even a couple minutes is “beneficial to the newborn, extending into infancy.” While that can also increase the amount of blood in baby’s red blood cells, the study said, this issue is benign.

And lotus does have one big booster: Dr. Sarah Buckley, the family physician, home-birth proponent and author of Gentle Birth, Gentle Mothering – who’s had three lotus births of her own. “I notice an integrity and self-possession with my lotus-born children,” says Buckley, who ultimately buried her children’s shriveled organs by special trees in the yard.

Hmm. Resting near a mandarin tree – or served as a roast: Which would you choose?

Lace up your skates and enjoy an evening of old-school fun with your family at one near you.
Read more
Travel

Are you looking to get away with your family or spouse? Check out the all-inclusive resorts in Michigan for some family fun or alone time with your significant other.
Read more
Health