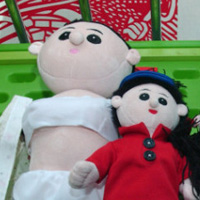 Note: Many URLs link to content some may find offensive; be mindful if browsing at work or around kids.

Ah, the visual aid: a key – and commonly controversial – component of sex education. Here in the States, attempts to illuminate human sexuality for kids have ranged from detailed art to the Wondrous Vulva Puppet. Back in my own sixth grade class, it was the much-hyped "pop-up book" – which, contrary to the rumors, we were not required to "touch."

Well, that’s not the case for the stuffed toys used in one Chinese school. These anatomically correct mom and dad dolls are part of hands-on learning about the body – for kindergarteners.

As you’d imagine, that’s stirred quite a hubbub since a Huffington Post article recently shed light on the sex ed dolls, used in Yaolan Kindergarten, a school in Zhengzhou, the capital city of the Henan province in central China. Most jarring were the photos, reportedly taken back in April and supplied by ImagineChina.com, which depicted young kids blithely exploring the plush genitalia of the parent dolls, complete with pubic hair, with guidance from their smiling teacher.

Before backlash, let’s look at the logic. Birth control is a big concern in China (abortion rates are high; remember the "One Child Policy"?). But, as a Chinese sex-ed author told China Daily, there’s a lot of resistance to teaching kids about sex in the first place – "especially from the older generation of parents who used to tell their children that babies were picked up in streets or jumped out from rocks."

Those are the words of Lu Weihong, who helped write Growing Steps, another sex-ed experiment in China. Launched in August at 18 Beijing primary schools, it features graphic depictions and descriptions of sex, aimed to teach kids as young as 6, China Daily reported.

But, despite the dolls – which also include a brother and sister – being "age appropriate," the tender age of these tykes is raising eyebrows. HuffPost reported that one parent told the Shanghai Daily, "I am worried that it’s not good for the kids to know sexual knowledge so early." (Sex ed is also historically absent in Chinese primary and middle schools, China Daily reports.)

Other parents are piping up, too. Feedback on the blog You Offend Me You Offend My Family feedback ranged from "Pervertedly wrong!" to "At this age, are these kids really equipped to understand what they are being taught?" Yet one mom of three offered this: "We teach kids about their eyes, ears and toes, so why be weird about genitals? They’re a normal part of our bodies. No reason to treat it like it’s some mystical, sinful thing."

It’s definitely not the first time this sorta thing has caused a stir. When parents of eighth graders at an Iowa school learned last year that a teacher was using a pair of puppets to show sex acts, for instance, outcry ranged from "inappropriate" to "pornographic." When news of the China dolls broke, Salon.com even compiled a slideshow of sex-ed toys around the world – from Beanie Baby-style genitals used in 30 Swiss grade schools, to the life-size Birth-a-Baby by Teach A Bodies.

Plush or pop-up – what’s your take on these visual aids in teaching sex ed to kids in schools?