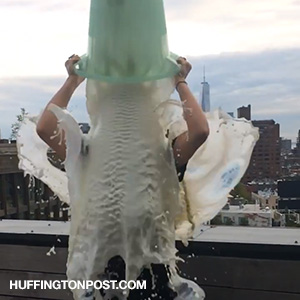 It was silly to some, but everything to those suffering from Amyotrophic lateral sclerosis, also known as ALS or Lou Gehrig's disease. This summer, streams of people took the ALS Ice Bucket challenge to raise awareness and funds for the neurodegenerative disease. But famous momma Olivia Wilde might have taken things too far when she decided to use her own breast milk to complete the challenge to bring attention to a different cause.

In case you've been living under a rock, we'll get you up to speed on this challenge: The person challenged has 24 hours to either donate $100 dollars to the ALS association or dump a bucket of ice water over their heads – to temporarily simulate the effects of the disease, and then post the video online. So far, this movement has raised over $100 million.

When Wilde, an actress, mother and avid supporter of breastfeeding, was nominated for the challenge, she saw it as an opportunity to not only donate and raise awareness to ALS, but also bring attention to breastfeeding rights.

"I'd like to dedicate this to my friend, Scott Lew. I'm donating in your honor. I hope this is OK, couldn't find any water so I'm going to use breast milk," she says in the video, pointing to a bucket full of what looks like milk and ice.

Wilde has been bringing attention to the issue of breastfeeding rights over the last few month, and even did a photo shoot for Glamour magazine while breastfeeding her son, Otis.

"Breastfeeding is the most natural thing," she told Glamour. "It felt like we were capturing that multifaceted woman we've been discussing – that we know we can be."

After completing her challenge, she did admit that the bucket was not completely full of her own breast milk tweeting "my boobs aren't that generous," but her stunt, nevertheless, caused backlash from the public.

"Such a waste of breast milk," Huffington Post reader, Patricia Mattson comments. "Breast milk is very valuable and is a gift. I don't see how this supports breastfeeding. I'm genuinely choked."

Other's, like Twitter user Kim Simon, are insulted by the way she completed her challenge, "Happy to give you ways you can really show your support to us breastfeeding moms," Simon wrote. "Your stunt was a slap in [the] face to those of us who work hard to breastfeed."

Though the public scrutinizes Wilde's milkshake shower, she seems to stand behind her decision and has certainly accomplished her goal: People are now talking about breastfeeding.