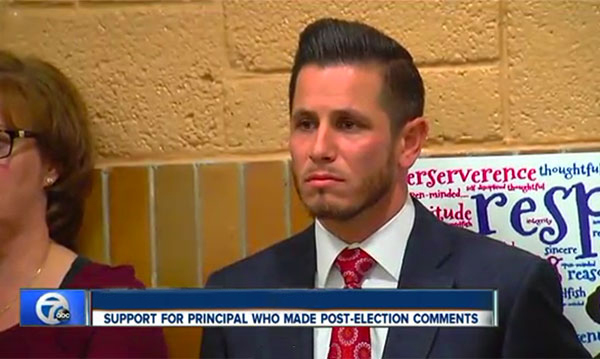 A principal in the Grosse Pointe area recently made a powerful message to his students reaffirming the school’s commitment to an inclusive and supportive environment.

It was the sort of message you’d think anyone could get behind, but that wasn’t the case. What happened instead? Some parents got upset and tried to get him fired.

Moussa Hamka, the principal at Grosse Pointe South High School, made the statement to his students after hearing about bullying incidents happening related to the recent presidential election, WXYZ Detroit reported.

“South, like the country, is divided. Several students have shared with me hurtful comments or actions directed towards them today as a result of the election,” the principal said in his message, in part, according to the WXYZ report. ” … I stand by our Muslim families, our gay students, our black families, our female students, our Mexican families. I stand by our disabled students, our immigrants, our Native American students. I will fight for your rights as well as our staff at South.”

That message apparently angered some parents, who started a secret campaign online to get Hamka fired, WXYZ reported. But the district isn’t having it and neither is the majority of the school’s parents and students.

“Moussa Hamka’s job is not in jeopardy,” the superintendent of the district said at a school board meeting this week, garnering applause and a standing ovation from the 100-plus crowd of supporters, WXYZ reports.

One of the parents who started the campaign was reportedly also in attendance at the meeting but didn’t speak.

Bullying and hate-related incidents have been in the news frequently since the election, and some commenters point out that it’s disappointing that school administrators even have to remind students to show respect like Hamka did.

“I find the fact that a principal even has to talk to his students about respect for others is just sad in its self,” Tammy Jean Tedder-Neumann commented on the WXYZ story. “Maybe the parents who are upset need to step up and talk to their kids themselves about these issues and other people wouldn’t have to do it.”

Most people would agree that letting students know that bigotry and bullying won’t be tolerated isn’t some sort of political statement – it’s part of a principal’s job. Especially when students are feeling threatened. So why the outrage? Isn’t unity and respect a message all parents can appreciate?

What do you think of this situation? Tell us in the comments.