Mattel has announced that Barbie's boyfriend has 15 new looks to choose from, but the stand-out style, the 'man bun' Ken, is getting shade from internet users. 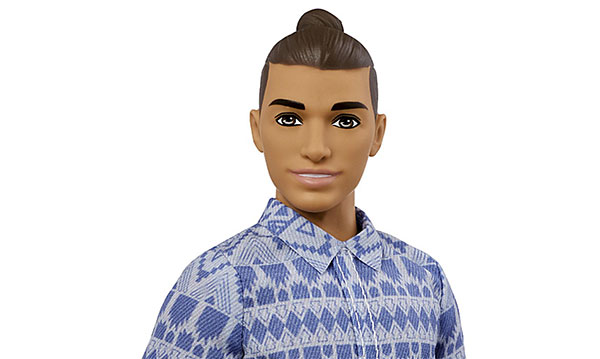 Remember back when Barbie sported blond hair, blue eyes a figure that would make it impossible for her to stand if she were real? Yeah, those days are long gone.

While you can still find the “original” Barbie around town, she’s ditched the one-size-fits-all look for a more inclusive look that features a rainbow of skin tones, eye colors, hair textures, body shapes, clothing styles and more (this is on top of her go-get-’em working-woman attitude) – you go girl!

And now, her boyfriend, Ken, has picked up on his steady’s newfound style when Mattel announced that he had 15 all new looks for kids to choose from. Ken now sports glasses, different skin and eye tones, and hairstyles, including the “man bun.”

If you don’t know, the man bun is pretty much the same thing as a (wo)man bun, but on a man – we’re really not sure why we need to specify the bun’s gender, but that’s a different story.

At any rate, the internet has not taken too kindly to Ken’s new ‘do (there’s a surprise) and started ripping into him immediately.

Now, I understand that Ken is just a toy, sans feelings, and people are entitled to their opinions, but these comments really got to the point of stereotyping those that chose to wear man buns.

While some simply said that the doll is “uncool,” which is fair enough if that’s your opinion, other’s alluded to the idea that somehow Ken is a loser with no job trying to “get back on his feet again,” while mooching off of Barbie, simply because of how he wears his hair – what?

And yes, while this story isn’t the end of the world and there are plenty of other issues that we, as human beings, should be worrying about, it really stood out to me is how judgmental people can be of a toy.

Because if these people are this judgmental of a line of plastic dolls – and one that really seems to be making an effort to include every unique and beautiful look in its collection – then how judgmental are they of the actual humans that these toys represent?

Yeah, yeah, I’m sure Mattel is looking at it from a money aspect, too, but the fact is that people come in different shapes, colors and sizes. They have different viewpoints, styles, goals, beliefs and obsessions. This truly is what makes people beautiful, and if a company is trying to embody that idea, shouldn’t it be celebrated?

Barbie and Ken have changed with America, and they really are sort of this living timeline of how far we’ve come since the ’50s – when the pale-skinned petite female figure was the only standard of beauty – to the introduction of Christie, the first African-American doll in the late ’60s, to the body-positive Barbie dolls of last year and this line of Ken dolls, which really declare that men don’t have to look a certain way, either.

The world is cruel enough without kids second-guessing who they are because of bullies.

Maybe I’m looking too far into this, but stereotypes are really good for building walls and not much else. So why do we continue to hate on one another for things as trivial as how we wear our hair?