KFC gave $11,000 in tuition to a family who named their daughter after the chicken chain's founder – which speaks volumes about the cost of college anymore. 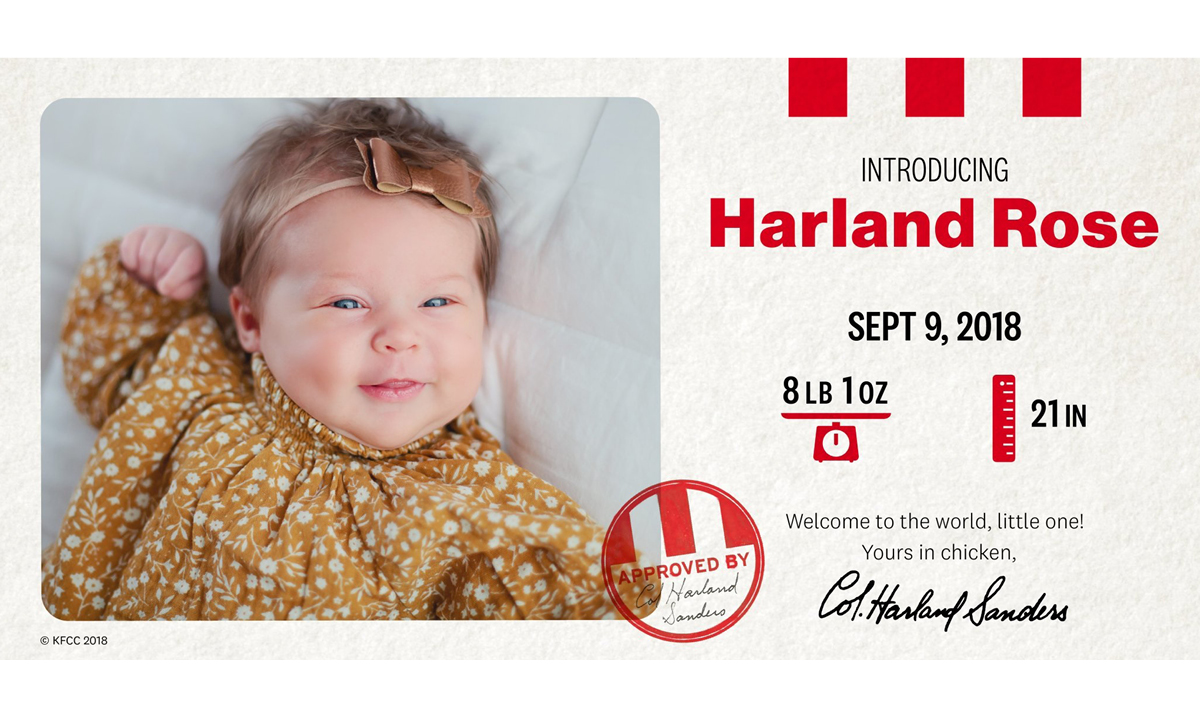 College is expensive. So expensive, in fact, that most of the people I know around my age will likely croak before they ever pay off the principal balance on their student loan debt – and don’t even get me started on the interest.

While it’s true that kids don’t have to go to college, the fact of the matter is that if they want a job that will actually pay the bills, college, trade school or some other kind of higher education is almost always a must.

This simple fact has some parents scrambling for ways to help their babies pay for school – up to and including trading the child’s name for college cash.

And corporations might be starting to pick up that.

Earlier this year, KFC wanted to celebrate the Colonel’s 128th birthday, so they decided that they’d give $11,000 – that breaks down to 1,000 for each of its chicken recipe’s 11 herbs and spices – to the first baby born on his birthday (Sept. 9) that shared his name, Harland. Which admittedly is pretty cute.

Just 12 seconds into the day, Anna and Decker Platt welcomed their daughter into the world and, you guessed it, they named her Harland or Harley for short, Scary Mommy reports.

KFC made good on the deal and put the money into a college fund for the 8 pound, 1 ounce newborn. With interest, Scary Mommy predicts that the tot will have around $44,000 saved up when she’s ready for school – which will get her about four semesters at an in-state higher-education institution (by today’s standards).

And that’s awesome, but it also says something to me about how expensive higher education is and how desperate moms and dads are to ensure that their kids can go.

I mean, choosing a name for your baby is typically something that’s really personal to parents. And while giving that up to pay for college is definitely a selfless act, I have to question – why is it necessary?

Why is college so expensive that parents have to go so far as to give up their child’s name? (Don’t answer that; I already know.)

To be fair, I can’t speak on the Platts’ decision to participate in this – perhaps they really just liked the name and decided to go for the money too – but I can’t help but really feel for parents out there who would consider naming their child something outlandish, like “Filet-O-Fish,” because they don’t know how their kid will pay tuition.

Call me crazy, but I think that quality education should be more affordable and accessible to all. Not just to those with all the money.

Would you give up your child’s name to help him or her pay for college? And does this idea hint that college tuition might be too dang expensive? Let us know in the comments.