Parents Sign Petition Against Toys That Spy on Kids 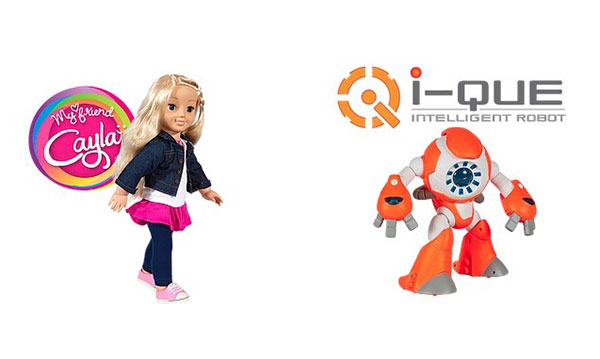 How would you feel if you found out a toy you bought for your kids this holiday season was actually spying on them?

“Outraged” would fit the bill for at least some parents, who are currently distributing a petition to get the toys removed.

The toy maker is Genesis Toys and the toys are the My Friend Cayla doll and the i-Que robot. As far as kids’ toys go, they both look pretty cool since kids can ask the toys questions and get responses back.

“Your child can ask Cayla about herself and Cayla will answer questions about her dreams and hopes for the future. To use this doll, download the free app and connect via Apple iOS or Android smart devices,” reads the doll’s product description on WalMart’s website. The robot toy has a similar feature.

The problem? Since both toys are connected to the internet, the questions kids ask of them get recorded – first to generate a response, but then the words are also uploaded to a voice technology system called Nuance, CNN reports.

Care2, which is distributing the petition to stop the toys’ production – now with more than 35,000 signatures – claims that Nuance has clients in military, government and law enforcement agencies and could be using the data.

“Toys are for innocent fun, not surveilling private homes,” Randy Paynter, CEO and founder of Care2, says in a press release. “My children are a bit too old for toys now, but I would have been aghast to learn one of their toys was recording our family without our knowledge or consent.”

An official at Nuance told CNN that the company doesn’t sell or use the data it collects for marketing or other purposes. Still, parents might not feel comfortable knowing the data is being collected.

“The Elf on the Shelf is one thing, but Genesis Toys is taking in-home surveillance of our children to a frightening level,” Aaron Viles, a New Orleans father and organizer for Care2, said in the release. “They need to cancel these toys immediately.”

Whether the information is being used or not, it’s definitely creepy – and seemingly unnecessary – that another company is storing all this data from a doll and robot made for kids. We have a feeling a lot of parents who bought these two toys will be checking into the return policy pretty soon.

What do you think? Would you be concerned about conversations being recorded? Should the toy be taken out of production? Tell us in the comments.