Parents Sue When Son is Kicked Out of Class for Cheating 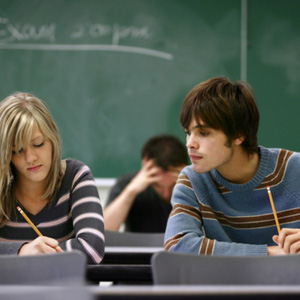 Jack Berghouse's teen son copied a classmate's homework, got caught and was punished. That's not really news. What is, however, is the fact that pops – who happens to be a family lawyer – took the school district to court.

The story, which stems out of Sequoia High School in Redwood City, Calif., has sparked intense criticism around the social media sphere. And the cries of "entitlement" and "helicopter parenting" have even overshot the blogs: Dad says he's been getting honest-to-goodness hate calls at his law office.

"I had no freaking idea this would happen," he told the local San Mateo County Times. In this trial-by-Facebook era, maybe he should've had an inkling. Whatever the case, when Sequoia demoted his kid from a sophomore honors English class – a demanding, pre-International Baccalaureate sorta deal – to the school's regular one, Berghouse was spurred to take legal action.

The loophole involves an "Academic Honesty Pledge." Signed by the son (and his mom, it seems), it "declares cheating is grounds for immediate removal from the advanced-level program," the Times reported. Pretty straightforward, right? But wait! Dad found another school document – apparently outdated – outlining a "two strikes, you're out" policy when it comes to plagiarism. So, as the suit formally puts it, the kid's "due process rights were violated."

Here's the thing. Berghouse doesn't deny his kid messed up. Neither does the kid, who's apparently been a wreck over it. Sounds like he's a pretty high-performing student who "has a chance to do just about anything," as dad put it (though the kid did reportedly declare the decision "tyranny" on his Facebook page). And not that mom and dad are anti-penalty, mind you. In fact, they offered "alternatives." Like working as an "afterschool teacher's assistant for the rest of the year" (which ends June 8), Berghouse told the Times.

To top it off, dad said of his motives, "I'm doing this for the other kids at Sequoia." Granted: Three other kids also were ousted from the class, also connected to the incident. But beyond that? For real?

Naturally, all this has gotten plenty of parents – and just about everyone else – hoppin' mad. Typical of the sentiments: "He flagrantly disobeyed the rules," says Cilly Woodward Fisher on the Times' feedback stream. "Whatever happened to discipline – and why doesn't this boy's parents think he deserves it?"

That's barely the tip of the outrage iceberg. What lesson does this teach kids? Hello, ethics? Is it really all about getting into the prestigious college? What about blowing taxpayers' cash here? And then, there's the nagging dismay about how normalized cheating seems to have become in some young minds (check out the MercuryNews.com follow-up article for some great insight on that).

For its part, Sequoia bent a bit on its newer "zero tolerance" policy. They offered to let the kid into the IB program next year and nix the mark from his record (two additional penalties they'd originally enacted). But the ousting? No dice. That stands. The family reportedly rejected the deal.

But whether or not "plagiarism" stays on this kid's school record, there's the small issue of all the coverage this has etched into the web – including blogs like yours truly. Though the kid's first name has been withheld, there's enough context to string the pieces together. Sadly, that may be dad's real legacy.

"Everybody Googles you in this town before they hire you," as a guy named Jonathan Byrne put it. "Real smooth, real smooth."