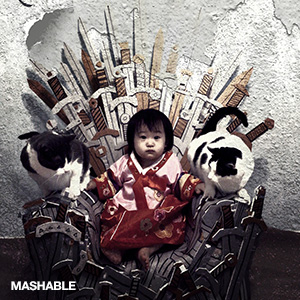 For anybody who loves the popular Game of Thrones book series or incredibly successful HBO TV show based on the books, this Oh Mother blog will have you geeking out like I was upon reading that this actually happened.

Parents Eric and Lisa Cheung threw a Game of Thrones-themed "name day" bash fit for royalty for their daughter Emma's first birthday, Mashable reports. I know what you're thinking – especially if you have watched the gruesome scenes on TV. But don't worry, because the parents assured the website that the shindig was rated G!

The party looks as though it actually took place in Westeros, with a banner reading "Happy Name Day Emma" strung up behind a homemade Iron Throne, complete with two "fierce" protectors (aka house cats), as seen in photos posted in a Mashable article.

And, who wouldn't want this homemade Iron Throne? The parents fashioned a replica out of a Pottery Barn foam chair and glued foam board and construction paper swords to it, Mashable reports, where Queen Emma sat to rule the party – and looked adorable all the while. A photo of the treat table shows dragon eggs and Stark's head snacks. Thankfully, Mashable notes the "heads" were candy apples.

Eric confirmed with Mashable that little Emma doesn't watch (and we'll assume can't read) GoT, and she's limited to age-appropriate media. So what in the Seven Kingdoms do Emma's parents think her reaction will be when she's older? "I suspect she'll find it amusing that she had her 15 minutes of Internet notoriety," dad told Mashasble. "At the very least, it'll make for an interesting wedding slide presentation."

While the writer of this article admittedly has become quite the GoT fan, some commenters on the Mashable article are so upset about the party, you'd think winter was coming.

"Maybe it's just me, but this doesn't seem like a 'lucky' 1-year-old to me," writes commenter Mariah Masell. "A lucky child has parents who put their child's interests before their own (at least for the kid's birthday!) and throws a party that has an age-appropriate theme that actually makes sense for a children's birthday party."

"Don't get it at all," comments powerslyde powerslyde. "So why not have a Friday the 13th, Call of Duty, Walking Dead toned down-themed party for a 1-year-old? Because it isn't about them – it's about the parents. Do that at your own party."

All right, all right, I see your points. But hell, the parents were creative and it looks like fun. That counts for something, right?

"It's always more for the friends and family than for the child at that point … and why shouldn't it be?" Mashable commenter Jennifer Miller says about first birthdays. "They spent a year taking care of a new baby and then you're gonna knock how they celebrate the occasion with their family and friends?"

She adds, "Stop acting like jealous children people. Maybe if you're good, someone will throw you a GoT birthday party…"

Note to self: Try not to be jealous of this 1-year-old and hope when my name day rolls around, I get a turn on the Iron Throne. A girl can dream, right?