Parents Who Steal and Bring their Kids Along for the Crime 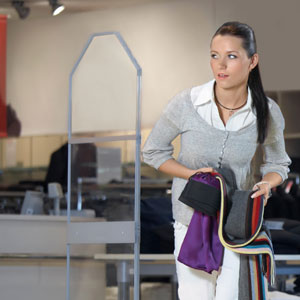 The way I was raised, one of the most shameful things a person can do is steal. Unfortunately, at middle- and high-school age, I found out that a lot of my peers were basically kleptos. So when I was in my teens, going out to the mall friends could get a little dicey. I found this out the hard way.

Ashley at the age of 12 was innocent – and obviously as oblivious as ever. So when a hand tightly grasped mine and a friend's shoulders one day while walking out of T.J.Maxx, I was so scared I almost peed my pants.

It appears my shopping buddy was up to more than just browsing, so a mall cop stopped us and forced us to empty our pockets. Not having swiped anything, I had no clue what was happening – so I just shoved my hands in my pockets and flipped all of my money onto the ground while shaking like a leaf and listening to Melanie (my friend the thief) protest the accusations and refuse pocket turnover.

It was too late for excuses, though: The officer had seen surveillance footage of her stealing and, as he reached down to pick up the "walking around money" my mother had given me earlier, Melanie made a run for it. Needless to say, she didn't get too far; they never do. So it's not a big surprise that two women stealing from a store here in Rochester Hills, Mich. recently got caught when they tried to elude authorities.

The surprise came when the police caught up to their fleeing van to find not only the thieves inside – but two children along for the ride! The women wound up in the custody of Oakland County Jail after trying to steal a duffel bag's worth of goods from the Meijer on Rochester and Auburn roads.

Out-of-state, another ludicrous situation found a 10-year-old boy whose parents used him to steal from a Home Depot in Utah. Apparently, his mother and stepfather had him push a cart of goods out of the store and tell employees that his parents were inside paying for the stuff. He wasn't very convincing, though: Loss prevention caught on and called police.

The parents' excuse was that they were stealing things (roofing nails and a flashlight) to sell for cash in order to buy school supplies. But karlicious, a commenter on the ClickOnDetroit article, isn't buying it. "Is there a black market for roofing nails?" he sarcastically wonders.

Another commenter, Kim_Ber_Bunny, and I share the same sentiment. She says, "How sad. Parents are supposed to set a good example for their children and mold them into the type of person that will be a positive force in this country. Shameful."

Could this type of parenting explain why so many children think it's OK to steal? Of course, these are extreme cases – but parents lead best by example. What are the chances that their children will choose not to go down the same path? Who knows: Maybe it's a good thing the kids were present at the time of the robberies. Maybe they'll learn from their parent's mistakes and, after seeing the repercussions, lead a life free of crime. One can only hope.

Meanwhile, my parents would be happy to know that I have never stolen anything in my life – aside from the pop that I forgot about on the bottom of my cart that one time at the grocery store. For weeks, I jumped every time I heard a siren. Does it count if it's accidental? I'm serious.