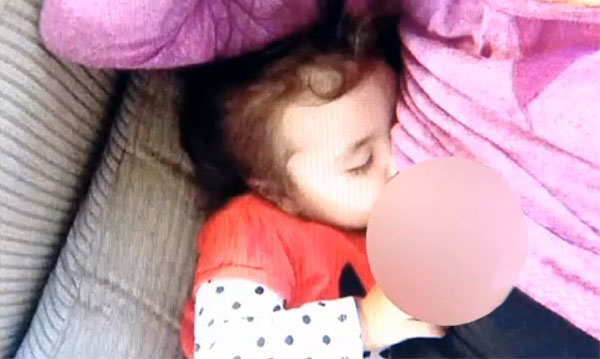 At one point, we’ve all come across an obscene picture or two on Facebook. Some of us even felt obligated to flag the photo to clean up the social media site. But have you ever equated breastfeeding to pornography and felt the need to flag nursing pictures as such?

That’s what happened to California mom Marissa Brown after posting a picture of her breastfeeding her daughter on Facebook. Brown says her daughter fell asleep while nursing and she thought it was sweet – they were “close and cuddling” so she decided to capture the precious moment and post it on Facebook.

But instead of supporting comments and an abundance of likes, some Facebook users thought the photo was inappropriate and it had to be taken down. The image was flagged as nudity or pornography, according to CBS Los Angeles, although there was nothing sexual about it and her nipple was covered in the photo.

According to Facebook, breastfeeding pictures do not constitute as pornography or even nudity. In fact, when Facebook answered a user’s question about whether nursing photos were allowed, the site stated, “Yes. We agree that breastfeeding is natural and beautiful and we’re glad to know that it’s important for mothers to share their experiences with others on Facebook.” They did add that a fully exposed breast and a child not actively engaged in nursing violates the site’s terms.

After her photo was flagged, Brown posted a second picture of her nursing and sticking her tongue out at the camera. According to Colorado Newsday, she also posted a long Facebook message defending nursing.

“Breastfeeding isn’t a trend. It is life. It is normal. It is natural. It is not shameful. It is not embarrassing. It is protected by LAW!” Brown wrote.

Brown has no intention of taking the photo down.

“I’m not anti-formula. I’m not anti-anything. I’m pro-breastfeeding. I’m pro-taking care of your child in any way that suits your family best,” she told KCAL9/CBS Los Angeles.

There are a lot of mixed reviews about Brown’s decision to post pictures of her nursing.

On The Stir, commenter Emmie says, “Nursing my kids was special time between us to feed and relax – it never occurred to me to whip out my phone, take a selfie, and post it on the Internet.”

On the other hand, The Stir commenter Chocodoxies says, “The whole country should be adjusted. The only thing that will normalize (breastfeeding) is seeing it. Your children should see it so they feel comfortable trying to nurse their children, or supporting their wife in doing so.”

Under the comments section on The Stir, one reader had a different view altogether. Commenter Mrseoc advices that mom’s think before they post personal pictures because that precious, intimate moment can end up anywhere.

“I know it’s beautiful. It’s bonding, it’s lovelier than lovely. But it’s MINE. Those images are MINE forever. Once you post a picture on Facebook, it’s owned. It can be sold or given away, downloaded by anyone who wants it … and some creepers do want it.”

As a mother who breastfed, I personally think nursing is very natural and beautiful. It’s nothing to be ashamed of. But it’s also something very personal between my daughter and I. I had no choice but to nurse my daughter in public places when she was hungry. I didn’t mind either. But posting it on Facebook is just unnecessary. I don’t feel you need an album full of pictures to show your dedication to nursing.