Photo of 'Natural' Barbie Shows Doll With Acne, No Makeup 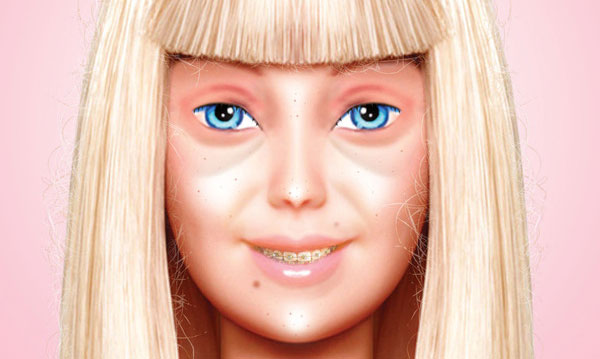 Probably more times than we can count, Mattel’s Barbie has made headlines, mostly because her body dimensions are rather unrealistic – and some worry about the influence her look has on young girls.

The pic posted to the free image-sharing website is a bit surprising when it first pops up on your screen – it’s definitely not the Barbie you’re used to. Yet after years of scrutiny over Barbie’s ever-so-perfect look, people aren’t thrilled with the “real-life” look, either.

“This is kinda exaggerating,” wrote commenter Eva on a Yahoo! Shine article. Eva is just one of a many commenters who wrote this “natural” version was also unrealistic. Others noted it looked like Barbie hadn’t slept all night or was doing drugs.

“So is the message here that no one is naturally pretty?” commenter MJ posted on Yahoo! Shine.

But another camp argued that the original Barbie’s impossible aesthetic never mattered anyway – especially when they were kids and played with the doll.

Commenter Whowhatwhenwhere on Yahoo! Shine wrote, “I grew up with Barbie in the ’80s. Not once do I remember any of my friends saying they wanted to look like Barbie in the literal sense. We all knew it was a doll.”

Brittag8, who commented on the Huffington Post article showing a photo of the makeup-free doll, added, “I had a ton of Barbies when I was younger. Played with them till I was 16. I’m 22 now. It does not matter to me and never mattered to me what Barbie looked like. I liked getting them and using my imagination.”

She continued, “I personally think Barbie’s image does not affect girls. I think the real world does. People tend to overreact on someone’s looks. I only started wearing makeup ’cause girls at my high school did, and I thought it was fun. People need to stop placing the blame on a toy and take a look at themselves.”

And, as Yahoo! Shine user KissMe pointed out, “Parents, teach your girls (and boys) to love themselves, respect themselves and not compare themselves to a plastic doll.”

Although the photo of the au naturel doll isn’t representative of a toy that will be hitting shelves any time soon, based on the public’s reaction, Barbie’s appearance – no matter what it is – will always be judged.