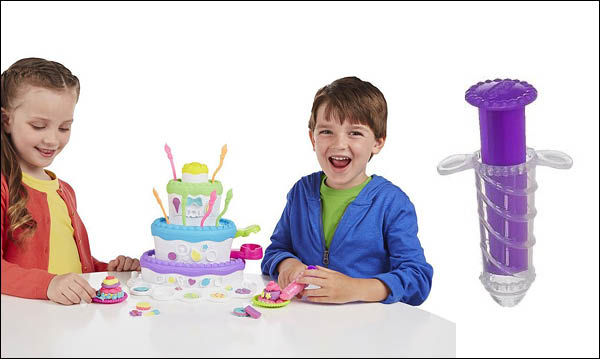 There's been a lot of fuss this week over a child's toy with questionable taste. I mean, just look at the thing – which emits a stream of Play-Doh "icing." I'm not sure if Huffington Post Canada gets first credit for coining the term "Dil-Doh," but it sure takes the cake. So to say.

The scandalous accessory is part of the Play-Doh Sweet Shoppe Cake Mountain Playset. Retailing for about $20, it touts allowing tykes ages 3-plus the chance to create "awesome fantasy desserts" and let their "imagination climb." Hasbro's product writers might be regretting some of those word choices about now.

That's because the "extruder" tool – designed to decorate fake cakes with faux frosting – looks like – well, we're adults here, right? It looks like a friggin' penis, complete with a twisted pattern up the shaft topped with a ring of raised beads.

At least that's what some outraged parents thought of the syringe-style item after the holidays hit. A number took to Play-Doh's Facebook page to complain, including Jennifer Turner. "This is NOT okay. This completely ruined our Christmas," wrote the Rhode Island mom in a screenshot that's been making the rounds.

Why the screenshot? Well, that's because, at least initially, Play-Doh appeared to be deleting the negative comments, as BuzzFeed reported. Meanwhile, the images and comments went viral, hitting a climax (sorry) Tuesday morning that prompted Play-Doh to address the issue on social media, acknowledging it "heard some consumer feedback about the extruder tool" and assuring that it's "in the process of updating all future Play-Doh products with a different tool."

According to at least one report, Hasbro was receiving social-media complaints back in November – and was quietly sending out "less phallic-looking replacement parts," notes news.com.au. Back on Nov. 12, in fact, Oklahoma TV station KTUL ran a report on the product, interviewing a couple of wide-eyed women laying eyes on the item for the first time. (A young mom, son on lap, stands out: "I guess a kid wouldn't know. Y'know … It could be considered … " she tosses her head back and forth, considering, and then just loses it, laughing.)

To its credit, Play-Doh appears to be letting all comments on the post stand – about 6,900 so far, and including a fair deal of good humor. Mom Stefanie Edwards Griffin declared, "I bought the kit for my daughter. Honestly I cried laughing!! She is too young to even know what the tool resembles. Well done design team, you guys are hilarious." Another pointed out a vintage Play-Doh product called the "Fuzzy Pumper" that managed to escape scrutiny (in a simpler, pre-social media time). And the top commenter snarked, "My mom wants to know what number to call to get a bigger one shipped out."

That's in reference to the Hasbro costumer service line, also supplied in the post for folks who own the product and want the now publicly announced "replacement extruder." And luckily, that one looks like – oh geez. Well, just look at the thing.