A 5-year-old girl in London was running a lemonade stand without a permit, so police fined her dad. Seriously? 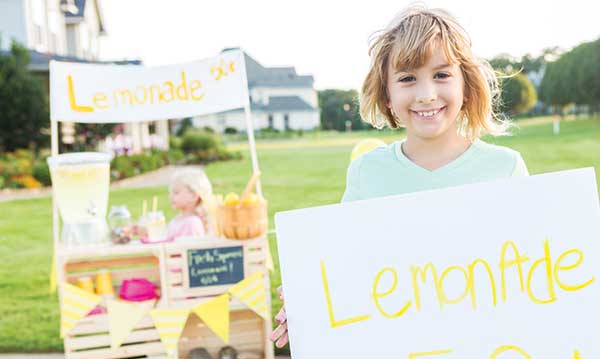 What’s a good ole American summer without a lemonade stand? Turns out, the American tradition of embracing the entrepreneurial spirit from a young age exists outside of the United States. Unfortunately, capitalism came at a price – 150 pounds or nearly $195 – for a 5-year-old girl in London.

Andre Spicer, girl’s father – and a professor at the City University of London’s business school – helped his daughter set up a lemonade stand as an attempt to tackle summer boredom, Spicer notes in an article he wrote for The Telegraph, which quickly went viral.

Spicer and his daughter took their four jugs of lemonade, a hand-drawn sign with lemons and the prices – 50 pence or 65 cents for a small cup and 1 pound or $1.30 for a large cup – and set up shop at the end of their street where a music festival was happening nearby. After 30 minutes, they had to close up shop when “four local council enforcement officers stormed up to her little table,” Spicer wrote.

The officers handed Spicer a fine of 150 pounds or $194.93 for running the stand without a trading permit, the Huffington Post reported. Spicer said his daughter burst into tears when forced to shut down her business while repeating, “Have I done a bad thing?”

The incident caused Spicer to analyze the stark differences in his childhood and his daughter’s. He recalled the days when children were allowed to wander freely without the watchful eyes of their parents – and officers –following them.

“The world my children are growing up in is radically different,” he wrote. “Everything children do today is carefully regulated by officials, inspectors and their own parents. There are good intentions behind all this obsessive monitoring. But these good intentions can quickly sour.”

The Huffington Post reported that the London officials dropped the fine after seeing the viral reaction Spicer’s story received. Officials also issued an apology, “We expect our enforcement officers to show common sense, and to use their powers sensibly.”

Spicer tweeted out a call to action for all kids across the world, Yahoo reported. In it, he said he and his daughter have received offers from various festivals and markets to set up their lemonade stand.

“This summer, we want kids to make a stand,” he wrote. “Making a stand is a great opportunity for kids to share their interests, build confidence and contribute to our communities.”

As with all things that go viral, Spicer’s story received a lot of feedback from the public – good, bad and reasonable.

“The exact same thing would happen in the USA,” Ian Smith said in a comment on Spicer’s article. “There are good reasons why anyone selling food and drink needs to have a permit and be properly licensed to make sure they are following food hygiene rules and are not about to poison lots of unsuspecting customers.”

Commenters have been critical of Spicer for sensationalizing the story by saying his daughter was fined when, in reality, his name was written on the fine.

“Correction to headline,” Jeremy Scarlett responded on Spicer’s piece. “‘I, a grown man, was trading without a license, in spite of being educated in business. I received a fine and am now trying to suggest that my daughter was fined.'”

Others have taken the side of the law.

“The enforcement officers were just doing their job,” Michael Irondell commented on Spicer’s story. “Mr. Spicer needs to teach his daughter not to be such a cry baby.”

So, the moral of this story is when life gives you lemons, make lemonade, but you might be thrown in prison for trying to make a quick buck.

What do you think of Spicer’s story? What’s the harm in a cup of lemonade? How do you tackle summer boredom with your kids? Let us know in the comments below!