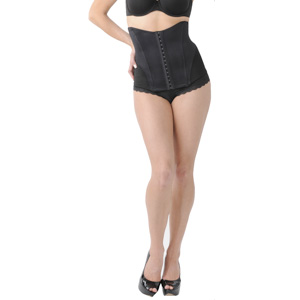 Just when you thought the archaic idea of the perfect hourglass figure was dead, the corset has made a comeback – this time to eliminate pregnancy pouches across the country.

Belly Bandit, a popular company that specializes in creating post-pregnancy "shape ware," just announced the introduction of its brand-new corset. According to a press release we got here at Metro Parent, it's due to debut in July.

The item, which has been dubbed the Mother Tucker Corset, is made with two layers of lightweight, breathable "SecureStretch" material that provides "double compression" and a six-hook design that gives "easy adjustability."

"Comfortable enough to wear all day, thin enough to hide under clothes and sexy enough to show off," touts the release, "the Mother Tucker Corset is a wardrobe staple."

The Mother Tucker Corset may be new, but post-pregnancy belly binding is by no means a fresh fad.

In fact, it's "been present in traditional cultures for centuries," notes Due Soon, a company that first started selling Belly Bandit products Australia. "It is only in recent years that western women are discovering the amazing benefits of this eastern practice." It notes that Japanese mothers commonly use a sarashi – or faja, as Hispanic moms call it – to "assist with faster weight loss and toning of their abdominal muscles post birth." Not to mention, The Corset Diet has made waves since about 2008 now. And, not long ago, actress Jessica Alba said she wore a double corset for three months to blast her post-baby weight.

Skeptics, however, wonder whether this craze has been truly modernized. Remember the rib-crushing, muscle-weakening corsets of the Victorian era?

Some experts offer caution – like Dr. Keri Peterson, a physician at Lenox Hill Hospital in New York City and advisor for Women's Health Magazine, who says corsets only give the illusion of weight loss and can be dangerous.

"If you can't take a deep breath, you can't be aerated efficiently," Peterson said in a Women's Health Magazine article. Also, the mag notes, cinched corsets could cause acid reflux and "trouble breathing deeply" – on account of too much pressure put on your stomach, diaphragm and lungs. "Corsets can only make you appear slightly thinner while you're wearing one," the article notes; "they can't physically change your size."

For that, stuff like easing back into exercise, eating healthy, taking your time and being "realistic" are probably better bets, at least according to the U.S. National Library of Medicine.

That said, Belly Bandit takes great care to point out its products' safety, highlighting its "medical grade" pressure and materials. Beyond targeting weight and stretch marks, it mentions various health perks like "comforting the mid-section after a C-section," "adding support to the back and legs" and "gently persuading muscles back together."

This might be a quick solution for that stubborn baby weight. Still, your body is what housed that child in your arms. We're all for wearing it proudly.

If, for you, that might involve giving the Mother Tucker Corset by Belly Bandit a try, it's available in nude and black in July 2014 and $89.95.