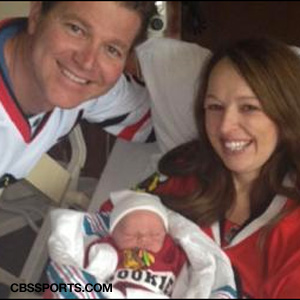 Moms-to-be: How dedicated are you to your favorite sports team? If you think you are biggest fan out there, think again.

When Chicago native Donna Lebano attended the May 9 Chicago Blackhawks playoff game against the Minnesota Wild with her three sisters for a girl's night out, something unexpected happened. At eight months pregnant, Lebano started having contractions.

But Lebano is such the loyal Blackhawks fan that she wanted to watch the team finish the game – although her body had a different idea.

"No way was I leaving," the new mom said in an Adventist Hinsdale Hospital statement. "We are a Hawks family. I had to see the end of the game."

After watching the Hawks win the game, her sisters took her to Adventist, where she delivered 6-pound, 5-ounce Owen Michael a few hours later – a perfectly healthy baby. She told the local news station that she hopes he'll someday be on the Blackhawks roster, the Huffington Post article notes.

Although it's a cute story, and baby was luckily fine, there are people who think mom made an irresponsible decision.

"Is that really something to be proud of? Your child's birth is secondary to some sporting event? Scary thought," commenter alexunlv commented on the Huffington Post article.

Others remarked how they thought it was no sweat the mom stayed during early labor.

"Somebody doesn't have her priorities straight. That being said, she should have been fine staying at the game during early labor," HuffPost commenter artemis93 opined. "A lot of women go through early labor at home anyways. Some hospitals will even turn expecting mothers away if they think it's too early in the labor." Yet the commenter concluded, "I doubt that was her reasoning."

At least Lebano had support from fellow Blackhawks fans commenting on HuffPost. "Hawk fans are the best! Congratulations," 47th wrote.