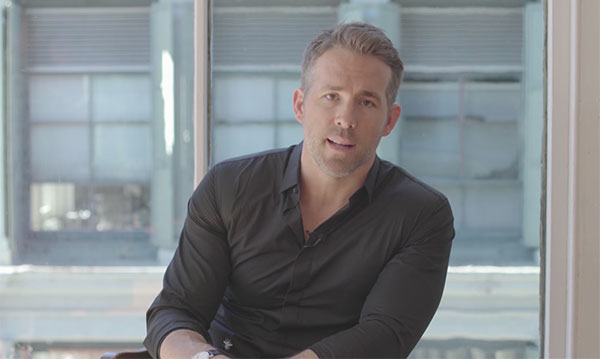 It turns out Ryan Reynolds is actually that funny in real life, too.

The guy who made “Van Wilder” and “Deadpool” household names is bringing some of that limelight to fatherhood.

Reynolds and his wife Blake Lively – a pair of celeb parents who have already scored points among moms and dads for their sweet quotes about life with kids (“She says ‘dada’ and I will walk through a cement wall to get to her,” Reynolds once said) – welcomed a second baby girl to their family in September. So it must have seemed like a good time for the second-time dad to gush a bit on the delivery room experience – that is, the experience from the sidelines, at least – for the benefit of other expectant fathers.

Reynolds offered dads-to-be some advice in that department this month during a recent sit-down chat with GQ Magazine. Take a look for yourself:

For starters, “Be in the room,” Reynolds recommends. “You’re not Don Draper.”

Second up might be his best words of wisdom of them all. To the dads gearing up to photograph their child’s birth, the star offers this advice: Capture the moment, but within reason.

“I think be judicious with the photographs you take,” he says in the GQ video, now viewed more than 175,000 times. “Because a photo of your daughter crowning hanging on the refrigerator, that’s not going to help anyone.”

Reynolds also talks about what you should (or, well, shouldn’t) say when your wife asks if things are OK “down there” (“…just respond in the affirmative. Don’t yell, ‘Better than ever!'” he says) plus a little reality check on knowing your place (“Realize that you’re pretty much the least important thing in the room,” Reynolds advises.)

Overall, it’s pretty hilarious and we’re so glad this celeb dad is willing to show off how much fun he’s having with parenthood. It’s something fans of his films – or just fans of what a gorgeous but seemingly down-to-earth couple Reynolds and Lively appear to be – can appreciate.

Another thing we can all appreciate? This other parenting quote from Reynolds: “When we had that baby, I fell more in love with my wife than I’d ever been in my entire life … I used to say to her, ‘I would take a bullet for you, I could never love anything as much as I love you. And then the second I looked into that baby’s eyes, I knew in that exact moment if we were ever under attack, I would use my wife as a human shield to protect that baby.”

Hey dads, what do you think of Reynold’s light-hearted advice? Anything to add? Tell us in the comments!

From Kings Island to Medusa's Slidewheel and more, here a few last-minute excursions to enjoy with the kids before the new school year.
Read more
You