Should Dads Wake Up With Baby At Night?

Many parents share nighttime duties but there's still a perception that moms are lucky if dad helps out at night. 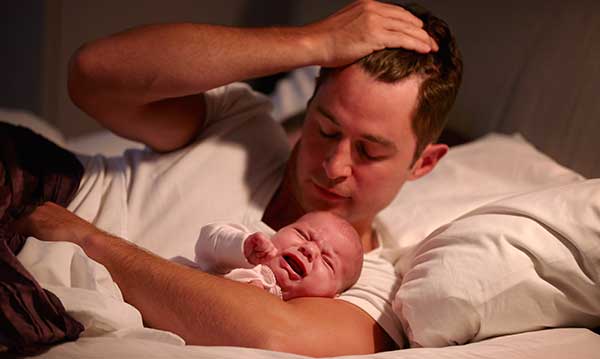 The duties that belong to a mom or dad are blurred in most modern families – moms aren’t handling all the cooking, cleaning and child-caring any more than dads are always the disciplinarian or breadwinner in the family.

But when it comes to waking up at night with the baby, there seems to be some lingering feeling that this duty falls to the mom – especially if she’s breastfeeding but even if she’s not.

Clint Edwards, who writes No Idea What I’m Doing: A Daddy Blog, recently shared his experience on the topic in a Huffington Post blog titled Just Because I Get Up in the Night Doesn’t Mean I Deserve Praise. He tells the story of how he told his wife, after a night of being up with the baby, that she should be grateful for his participation.

“At least I get up with her. A lot of men don’t. You should be grateful,” he says, to his wife’s dismay, but he realized he was wrong 20 minutes later and backtracked his comment.

“I called Mel from work, and told her I was sorry. ‘You’re right,’ I said. ‘This is a partnership, and I shouldn’t act like I’m doing some amazing thing because I get up in the night. I’m going to stop,'” he wrote.

It’s great to hear this dad so quickly took back his statement and we can only imagine his wife actually is grateful about this fact. But are other dads still inclined to think they’re doing their wives a favor if they’re involved at night? Is it assumed that mom should be the one who primarily gets up with the baby?

At least one study from 2004 showed moms of newborns lost more nighttime sleep and had more fragmented sleep than their partners, but we couldn’t find any more recent research to tell us if the trend is changing.

It never occurred to me that my husband shouldn’t help with nighttime parenting when our kids were babies until others suggested it. “But he works!” I was told. “But you’re breastfeeding,” family reminded me.

But even dads who can’t help with feeding can change baby’s diaper, swaddle baby, rock baby to sleep and so on. Even getting up to simply bring baby to a nursing mom is helpful, and dads need experience putting baby back to sleep for practical reasons, too. Why shouldn’t both parents participate?

Sleep deprivation is real. It contributes to postpartum depression symptoms and many moms can be brought to the brink of insanity after weeks, months or even years of being the only one who gets up with a wakeful baby or toddler.

Tending to baby’s needs at night seems like a responsibility and privilege that both parents should share, and most dads I know are just as involved in nighttime parenting as their wives. Some families may find a different arrangement works best, though – one friend tells me her husband wears ear plugs, even though they both work full-time, while some stay-at-home moms say the chance to nap when baby naps during the day makes up for being the one with interrupted sleep at night.

We want to know what you think. Should dads get up with baby at night? Do they deserve praise if they do? Does it make a difference if mom or dad works? Tell us in the comments.

This post was originally posted in 2015 and is updated regularly.