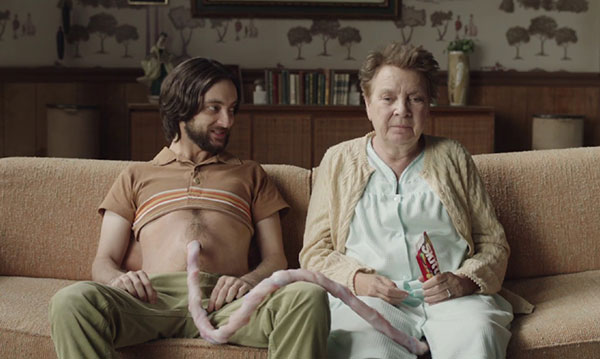 A lot can happen in 30 seconds.

Skittles’ most recent commercial – released just before Mother’s Day, which falls on May 14 – shows a disturbing image of a mom and her grown-up son “sharing” Skittles through an umbilical cord.

Skittles is known to push the boundaries of grossness in its advertisements, from the notorious “Skittles-pox” ad– a girl pulls a Skittles off of a guy’s face, like a pimple, and eats it, and then asks if it’s contagious – to its French-kiss commercial,  where one girl notes to her friend that “Lewis never smiles,” so the friend walks up to him and tickles him, revealing that he has Skittles for teeth (naturally, she then makes out with him and eats nearly all of the Skittles). So perhaps it shouldn’t come as a surprise that the company’s most recent commercial is one of the most shocking.

After the first two guesses, lemon and orange, the camera widens to a shot of an umbilical cord going from the woman to the man.

After the wide view, followed by a close-up of the undulating umbilical cord, the two laugh together creepily – and the son says, “I miss dad.”

Skittles then flashes its slogan “Taste the Rainbow,” but also includes “Cut the Rainbow,” and finishes with the mother saying, “Happy Mother’s Day.”

Despite Skittles’ reputation, this segment is one of its most visually explicit. The umbilical cord is clearly coming from the woman’s lower abdomen and going into the man’s belly button.

While television ads in general have become more graphic and shocking over the years, this one definitely brings the Skittles brand to a whole new level of weird.

Some people applaud Skittles for taking on crazy, outrageous advertising and view it as a strong public relations strategy, while others are straight-up grossed out and slightly offended by the nature of the ads.

“That has to be the most disturbing commercial I have ever seen in my life,” says Lacey Tipton on the Skittles Facebook page post of the video.

On the flip side, Talor McPhearson is a fan of the controversial ad. “Skittles and Wendy’s are my spirit PR teams 🙂 I love this!,” she commented on a Buzzfeed post.“Sorry to anyone that doesn’t.”

Skittles has long been a favorite among kids and adults alike, but its ads seem very targeted toward adult humor (or disgust).

But, whether positive or negative, it’s still publicity – and that will have lasting effects on the Skittles brand.

Do you think this commercial is funny, smart, or simply disgusting? Could this ruin Skittles’ reputation as a kid-friendly candy? Tell us in the comments.