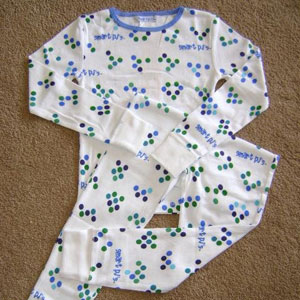 Pajamas come in all shapes and sorts. You've got your nightgowns, your slouchy-T-shirt-and-lounge-pants duo, your thermal long johns. And, this time of year, you've got your full-grown adults hopping around in Easter Bunny jam-jams posing for countless photos at the mall.

So I thought. But then – among the Facebook photos of tear-stained, shell-shocked (and, in a couple rare cases, delighted) kids on the Big Rabbit's lap – a friend's rant popped up in my newsfeed this morning that alerted me to a new brand of nightwear.

"Really – 'smart pj's' that can read bedtime stories to your kid?" she fired off. "Try parenting: Put the iPad and the iPhone away, turn off the TV and spend time with your damn kids!!"

I perked up. What sort of strange, "smart" skivvies were these? They sounded borderline creepier than a bunny suit. (Seriously, folks, check out the Sketchy Bunnies page on Tumblr. This is the stuff of nightmares.)

Digging around, I discovered that Smart PJ's are, indeed, a (patent-pending) thing. Available in youth sizes 1-7, for bed bugs ages 1-8, the onesie-style jammies, featuring "boys" and "girls" color schemes, are covered with charming clusters of polka dots. Man, I love me some polka dots. But, in this case, they have a hidden purpose.

See, they're actually – and here's the "smart" part – QR codes. So, you point your smartphone or smart-tablet at 'em and shoot (after downloading the free Smart PJ's app, of course, which works with all Apple and Android products). Then, it cues up a nursery rhyme, lullaby or some "interesting facts about different animals," according to WTVY.com in Idaho – where the creator is from.

His name is Juan Murdock. He's actually a Realtor from a town called Idaho Falls. He seems like a nice guy. He's practically beaming in the video.

"I don't know if it was the dad in me," he tells WTVY. "My wife and I have six kids, so I know how important a bedtime story is."

So much for my visions of a maniacal, money-grubbing Orwellian corporate inventor. And Murdock's doing modestly well, selling about 100 pairs of the (currently) $25-a-pop garments a month. It all started feeling downright charming.

Little eyes glued to screens before bedtime, for one. A recent study affirms that kids who watch TV, play video games or use the computer "right before bedtime are likely to take longer to fall asleep," the National Institutes of Health notes. "That could add up to a sleep deficit."

There's that "avoiding/curtailing screen time if your child is under age 2" business from the American Academy of Pediatrics, too – and its advisory that no kid should be soaking up more than two hours a day (they average is more like seven).

Naturally, good parent decision-making comes into play here. And it's not like your kid's going to insist on playing all 50 codes every night (or, at least, here's hoping she konks out somewhere along the way).

Yet I can't quite shake my pal's argument. I mean, yeah, you can cuddle up with the iPad and listen to "Humpty Dumpty" together. But it's a far cry from mom or dad's voice bringing non-digital ink from a paper page to life.

So sure: Buy some Smart PJ's. But, like my friend says, do some gosh-darn bonding with your kiddos, too. Even if it means more creepy Easter Bunny photos in our feeds.