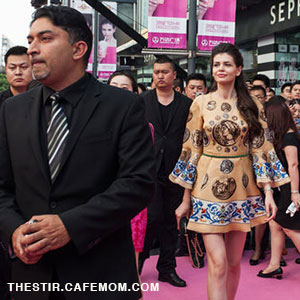 You think that returning a puppy to the shelter or pet store is a deplorable move? Imagine returning a kid.

Last week, Monica Gabor, a Romanian socialite that has been described as the equivalent to Paris Hilton, walked into the Jiu Placement Centre for Orphans in Bucharest. She walked out with a 3-year-old boy that she had vowed to adopt on the spot, saying, "He would not lack for anything, particularly parental love."

That night, the child, who was in a new environment he was not familiar with, became upset and cried. The next day, Gabor returned the child to the orphanage after she decided she was not able to cope with the child, according to Mama Mia.

The trip to the orphanage was allegedly part of a PR tour staged to improve her image with the Romanian public after her divorce with Romanian millionaire Irinel Columbeanu, who currently has custody of the couple's child, Romanian tabloid Libertatea reports.

Owners of the orphanage told the same tabloid that Gabor wanted to spend a weekend with the child, but the child couldn't adapt. When she put him to bed, he began to cry and couldn't sleep. She brought him back the next day.

"The question of adoption was simply stopped at that point because quite simply she didn't want him anymore," they say.

The decision to return the child has sparked anger and disgust toward Gabor and the Jiu Placement Centre, especially from readers of parenting blog, The Stir.

Some compare the adoption agency to a pet shop where you can walk in, ask for a child and walk out. Others call Gabor horrible and stupid. While some simply give their well wishes for the boy that was affected by her decision.

"As much as this story makes me want to smack this woman upside the head, my biggest hope and concern is that this baby boy finds a good home with a caring family that will keep the promise this idiot of a woman failed to keep," The Stir commenter Kathryn Mary Horne writes.

Gabor is not the first person to return an adoptive child. Back in 2010, Torry Hansen returned a 7-year-old Russian boy after she decided she couldn't handle his behavioral problems. She was ordered by the courts to pay child support for the boy in 2012.

Cases like these go to show that adoption is a serious decision that should be looked at from all angles before the child is brought into the picture.

Apparently, the 3 year old does not remember the incident, and we're glad Gabor realized that she couldn't handle the adoption before he could.