A soon-to-be mom told her husband too many people were touching her belly, so he gave her a way to ward off unwanted belly grabs. 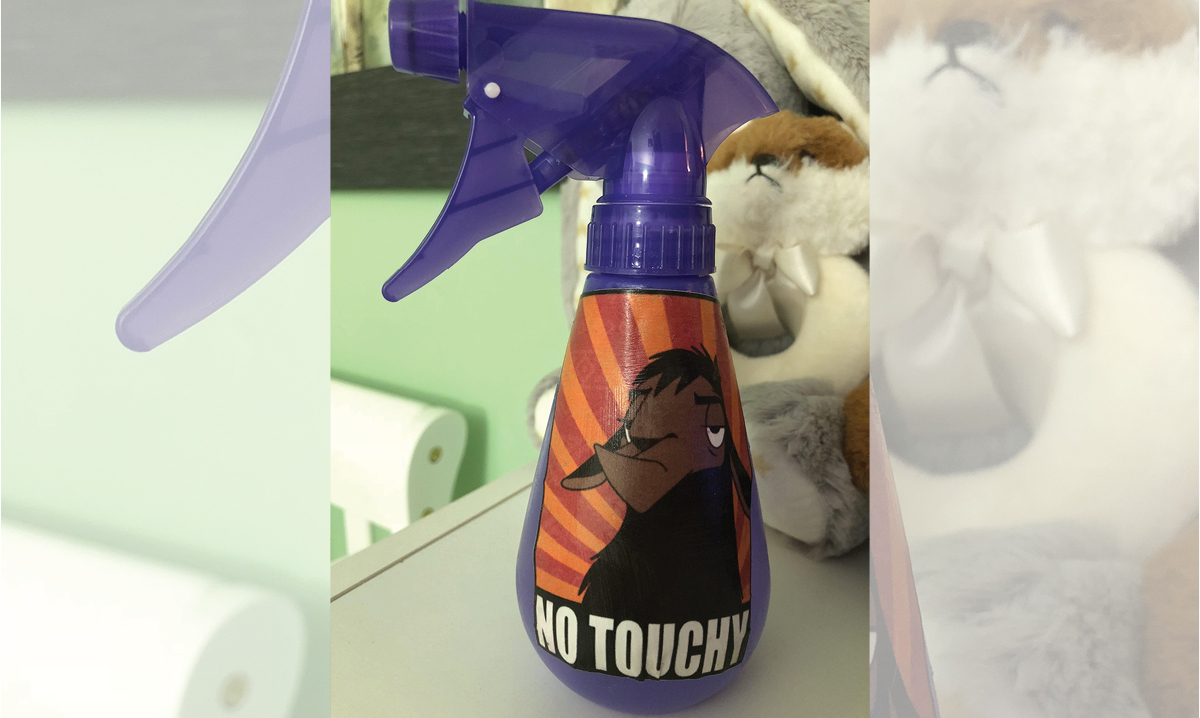 When mom-to-be Samantha Reid told her husband about the unwanted belly rubs she’d been getting since becoming pregnant, he came up with a way to keep those belly grabbers at bay: an Emperor’s New Groove-themed “No Touchy” spray bottle.

The gift came about after Reid got into an argument over belly grabs with one of her relatives – who immediately reached for her pregnant tummy and caught the mom-to-be off guard. “I told her that I wasn’t comfortable with anyone touching just yet since the baby wasn’t moving regularly, but she waved it off and said because we are related, it is her right to touch my belly whenever she wanted,” she tells POP SUGAR.

The relative went on to say that people are just excited about the miracle of pregnancy and that it’s silly for Reid to be offended by it.

But she is. And while she understands the excitement, Reid believes people should ask before touching – especially when dealing with an introvert like her. She also has another reason she’d like to avoid being touched, POP SUGAR reports.

“I also turned out to have an anterior placenta, which basically means there’s a thick, spongy barrier between my baby and the outside of my belly that prevents regular movement from being felt, and it makes being touched even weirder.”

So now, thanks to her thoughtful husband, she has the perfect way to keep hands off her baby belly. And she’s looking forward to getting the chance to use it.

“I doubt I have the guts to actually spray a stranger in the face if they touch me without asking, but I am excited for my family reunion next month,” she tells POP SUGAR. “My family has heard us joking about the spray bottle and is aware of my disinterest in being touched, but if one of them tries anything anyway, you can bet they’ll get a faceful of water! It will be funny to everyone there, but I hope it will also make them stop to think about asking before touching people in the future.”

Reid is among the countless pregnant women who complain about people touching their growing belly, but I disagree. It didn’t bother me when I was expecting. And truthfully, I wasn’t unexpectedly touched at the mall, grocery store, etc. Most of the people who wanted to touch my belly asked before they did.

However, even when someone did grab my growing belly without asking, it never bothered me. I was too excited to be pregnant after struggling to conceive. I soaked up all the attention and belly rubs – unexpected or not.

What do you think of this spray bottle hack? Would you make or use one of your own? Tell us in comments.