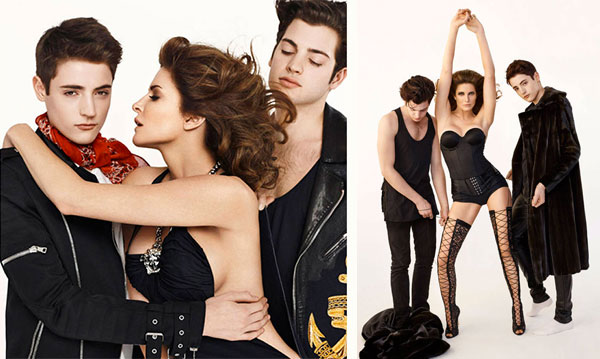 Stephanie Seymour, one of the leading supermodels of the ’90s who’s known for Victoria’s Secret spreads and more recently as the new face of Estée Lauder, is one hot mom. At 45 years old, she’s just as stunning as she was decades ago. Showing off her killer bod and some kick-ass fashions – including Tom Ford lace-up boots and a Dolce & Gabbana corset, Seymour makes quite a statement. But that statement is less about her clothes and more about her sexy poses with her sons.

Seymour’s boys – Peter, age 20, and Harry, 17, pose alongside their famous mom for a Harper’s Bazaar spread. According to the magazine, it’s the first time the trio has been photographed together for a publication. It’s clear that fashion is a family affair, but there’s something a little bit off-putting about this family photo shoot.

The spread, titled Mum’s the Word, features high-fashion photos of Seymour and her sons engaged in some suggestive poses. In one, Seymour’s eldest rests his head on mom’s thigh. And in another, Seymour backs her booty into her youngest boy.

This isn’t the first time the family’s closeness has caused a stir. According to The Huffington Post, Seymour and then-17-year-old son Peter were caught kissing and embracing on the beach in St. Barths back in 2011. Access Hollywood notes that Peter quickly responded to the frenzy in an open letter to Gawker stating that his relationship with his mother is acceptable because he is gay.

Regardless, it seems the photos have caused some chaos.

While most Huffington Post commenters found the images creepy and incestuous, Vicky M. doesn’t think there’s anything wrong with them. “There is nothing incestuous about the photo. It is more that most women would not feel comfortable taking these photos with their children and I understand that, but her children were not raised in the U.S. and fashion and mindset are very, very different in Europe! I think the photos are beautiful and I see them as art, not as perversion.”

But we here at Metro Parent are wondering the same thing as commenter Mary: “Has this been submitted to Awkward Family Photos yet?”