The shirt is sold on Amazon and pokes fun at two eating disorders. Critics want it removed while supporters cite free speech. We think it goes too far. 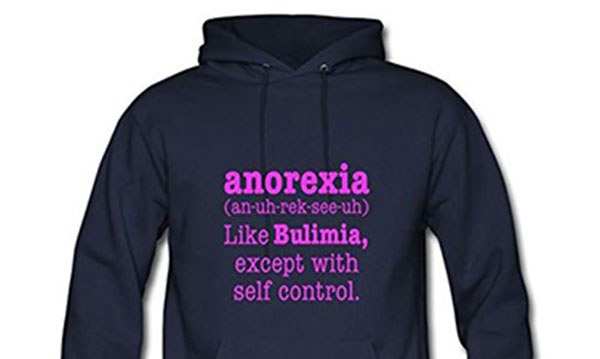 The ability to say how you feel without persecution from the government is truly a wonderful thing. In fact, considering I’m unbelievably, unashamedly and openly opinionated, it’s one of my favorite inalienable rights.

Sure, depending on how you exercise that right, you might get some pushback from people who have different opinions but you can rest assured that, for the most part, you won’t get locked up based on what you say or how you say it.

But with such an amazing freedom comes great responsibility that some people don’t realize. For example, you shouldn’t yell “fire” in a crowded theater because it could kill people; you shouldn’t march through the streets screaming obscenities or derogatory remarks at people and you shouldn’t don phrases that would cause distress to others.

And yet, every now and then, we run into those people who think it’s perfectly acceptable to degrade people and poke fun at topics that ravage people’s lives because “free speech, man.”

Take this hoodie sold on Amazon by ArturoBuch. It’s emblazoned end with the phrase, “anorexia: Like Bulimia except with self control.”

… Because nothing says that you have a sense of humor like horrible grammar on a sweatshirt that makes fun of two eating disorders, including one that has the highest death rate of any psychiatric illness.

It only has 1.5 stars on Amazon, with most reviews calling for its removal, but some still calling it hilarious.

But where exactly is the humor?

Millions of people suffer from eating disorders in the U.S. and the process of recovering is long and difficult. The last thing survivors need is to be walking down the street and be reminded of the control that they felt when they had anorexia or be made to feel bad about not having an extreme enough eating disorder.

Think about it: If you had a disorder or disease that reduced you to a bones inside a skin sack, is it something you’d want to be reminded of or picked on for?

Maybe there’s a few survivors that would find it funny, but what about the ones recovering? They’re already in a vulnerable position – why make it any worse for your own pleasure?

And that’s the real issue here. Saying hurtful things or wearing triggering items, like this sweatshirt, ultimately comes down to a lack of respect and empathy– something that should be inherently given until it’s lost.

If we take a step back and look at how our actions affect other people, how what we say affects other people and then respect how people feel about certain things, instead of just blindly reacting because the law says you can, the world be a whole helluva lot kinder.