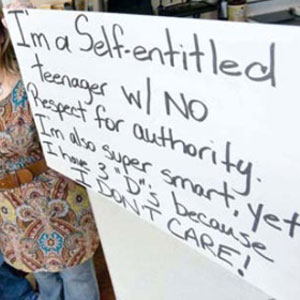 Public humiliation is seen as an age-old form of punishment that was more acceptable during the days of The Scarlett Letter than it is now, right?

Guess not, because this method of punishment has been making a comeback – especially in the parenting realm. After all, you may remember the parents who publically punished their toddler for popping in the shower, or the parents who forced their 8-year-old to don a sign that read "I like to steal." What about the father who resorted to Facebook to teach his daughter a lesson, remember him?

Well, the public humiliation continues. Enter Gentry and Renee Nickell of Florida, who forced their daughter to wear a sign at the corner of a busy intersection to teach her "respect."

The parents enforced 90 minutes of public humiliation, in which their daughter stood at the corner of Ferdon Boulevard and U.S. Highway 90 holding a sign that read, "I’m a self-entitled teenager w/no respect for authority. I’m also super smart, yet I have 3 "D's" because I DON’T CARE," according to Lylah M. Alphonse's article on Yahoo! Shine. As motorists passed, they snapped photos – which ultimately led to the story going viral – and someone even called the cops.

What could possibly have been the parents' reasoning for this type of tough-love discipline?

The family noted that after Renee's brother died in Afghanistan in 2011, they – particularly the kids – had a hard time adjusting to his loss, and their teenage daughter began acting out, according to the Northwest Florida Daily News. Grounding her didn't work, so the couple resorted to something a Christian counselor suggested year ago: public humiliation, Renee told the NWF Daily News.

But once their method went viral, people began questioning if the parents went too far, and some even questioned if therapy would have been a better answer for a teen that was still possibly grieving the loss of her uncle.

"Here's the thing – these things sometimes go viral. As we teach our kids, the Internet is forever," Blueathena623 commented on an article by Maria Guido posted on Mommyish.com. "When these teenagers grow up and apply to schools, find partners, or apply for jobs, do you really think that these images and stories won't affect those people's opinions at all?"

"Public humiliation isn't a solution to anything and usually does more harm than good, especially with teens (some more than others)," Tinyfaeri commented on the same article. "And in this case, she lost her uncle with whom she was very close shortly before the acting out started – therapy to address the root cause would perhaps have been more effective than making her stand at a busy intersection with a sign around her neck. Some things, even in this over-sharing, social media-ed, public world should still be private."

While some may not agree with the Nickells, others cheered them on, arguing that kids nowadays are too out of control.

"Right on. Kids think that everything should be given to them. About time parents got their backbone again," school bus driver Patti Brothers VanBuren commented on a thread on AllProudAmericans.com.

And, although the cops came to the scene to make sure the teenager wasn't in eminent danger, they left after the teen herself affirmed that she understood why she was there. As for the Nickells, they feel that their daughter learned a vital lesson.

"At the end, she gave me a hug in front of the police officer and told me she was sorry," Gentry told the NWF Daily News.