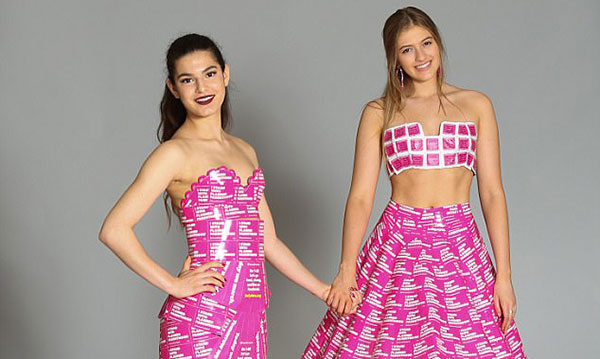 In couture, choosing the fabric of a dress can be a make-or-break decision. However, for Ethical Culture Fieldston School‘s annual “unconventional materials” fashion show– a pretty popular tradition at the Bronx-area school in New York City– you’re going to need to skip over the Carmeuse satin and reach for the metal washers, instead.

In the past, students of the private high school – which in part focuses on students’ “moral development” and points them toward “service and social justice” and where tuition is currently $47,000 per year– have made masterpieces using materials that range from Band-Aids to Bernie Sanders merchandise. But this year, best friends Karolina Montes, 17, and Zoe Balestri, 16, decided to use their pieces to weigh in on a political topic that has received a lot of attention recently.

“This year, we thought after everything that’s been happening in the world and with this country, it was important to make our dresses beautiful and fun but also to give them some sort of meaning,” Zoe told Buzzfeed News.

Zoe’s dress was a trendy two-piece ensemble. Her hand-sewn bandeau top was made entirely of pink packaged Planned Parenthood condoms featuring the phrase, “Don’t eff with us, don’t eff without us,” and her skirt was covered in about 500 complementary Planned Parenthood stickers, Daily Mail reports. Karolina’s mermaid-style dress, complete with a train and a sweetheart neckline, also featured the pink promotional papers and stickers.

The girls’ gowns quickly went viral and caused controversy. The designs were met with a fair bout of criticism – and the internet was at times ruthless.

“Top-notch creativity to promote what? Would love to see these young ladies watch and participate in the abortion procedures for which they are advocating,” Irene Lariviere from North Bay, Ontario, commented on Buzzfeed. “Counting baby body parts is different than walking about preaching a message.”

Many readers saw the girls’ creations as a sign of the times and future – for good or bad.

When Planned Parenthood posted its Facebook link, complete with an “OBSESSED” caption, Sariah Priestess commented, “It warms my heart that young women are getting involved in their reproductive health and rights. You go girls!”

Meanwhile, when pro-life website LifeNews posted its link to Facebook, Marilyn McNeill had this to say: “New lows in moral depravity and people call it progressive.”

Whether you feel these girls’ dresses stole the show or crossed a line, it’s clear they’ve touched a nerve with many people.

What do you think of the Planned Parenthood gowns these two teens created for their private high school’s fashion show?

Want to find a restaurant the whole family will enjoy? Here is a list of places to try out.
Read more
Advice