In an end-of-the-year mock election, a junior high teacher presented one of her seventh graders with an award for 'Most likely to become a terrorist.' Seriously. 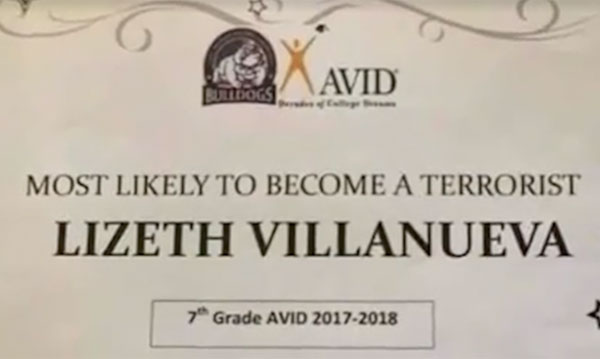 Update: On June 19, The New York Times reported that the teacher who gave the award has lost her job.

Mock elections are usually a fun and hilarious way to end the school year.

However, a Texas teacher took her class’s mock election to a whole new – and totally offensive – level.

Lizeth Villanueva, age 13, was given the award for “Most likely to become a terrorist” by an educator at Anthony Aguirre Junior High School in Channelview, Texas, a city just outside Houston.

The seventh-grade honors student “gets good grades and has never been a discipline problem,” The Washington Post reports.

In other words, she hasn’t provided any reason for her teacher or fellow students to view her as a potential terrorist. But then again, of course, even if the ill-advised award had been given to a student who struggled academically or acted out in class, would that somehow make it OK?

To make matters worse, young Lizeth was presented with the award just one day after the deadly Manchester, England attack, whose victims included young children at an Ariana Grande concert. But the teacher reportedly laughed and handed Lizeth the award after announcing the it.

Ena Hernandez, Lizeth’s mother, found nothing funny about the situation.

“I was upset and very mad when I saw the award,” Hernandez the Post. “I was surprised because my daughter has been doing well in the honors program.”

Lizeth, who is Salvadoran American, was shocked, the Post added.

Two honors classes were brought together to participate in the poor-taste ceremony, which also included awards for “Most likely to cry for every little thing,” and “Most likely to become homeless.”

Other teachers also just laughed when the awards were presented, news outlets say.

The school district released a statement saying, “The Channelview ISD administration would like to apologize for the insensitive and offensive fake mock awards that were given to students in a classroom. Channelview ISD would like to assure all students, parents and community members that these award statements and ideals are not representative of the district’s vision, mission and educational goals for our students.

“The teachers involved in this matter have been disciplined according to district policy and the incident is still under investigation.”

Hernandez, however, has called for the teachers to be fired, stating, “They will continue the same thing.” Lizeth has not been back to school, her mom also told the Post, because she “feels uncomfortable.”

Ambrosia Marvin, a self-identified teacher, left this comment on the same Post article: “Lizeth and your mom: Not all teachers are insensitive jerks. There are charter, private and homeschool programs in the Channelview area that would be happy to have you. You do not deserve to be treated this way. While I am not crazy about all of my students, I still practice the golden rule – ‘treat others the you want to be treated.'”

Personally, if I were in Hernandez’s shoes, I could not let my daughter back into a classroom where she was humiliated by her own teachers.

Even insinuating that an innocent student is “most likely” to become a terrorist – especially in this day and age – is grounds for serious reprimanding.

Would you allow your child back into the classroom after an incident like this? Tell us in the comments.