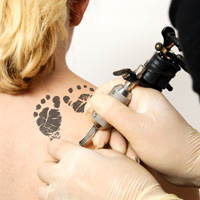 Now, it's time for pops to step aside. More women are lifting their sleeves (and other various hemlines) and going under the gun – all prompted by mommyhood.

For some new moms, childbirth is a green-light to finally get that ink, according to recent reports – including one by ABC News' Good Morning America. Celebs, naturally, are leading the way. Take tatt-happy Angelina Jolie, whose ink includes a left-upper-arm roundup of the geographical coordinates where her six kids were born. Or fashion icon Heidi Klum, whose three stars represent her kids. And then, there's Pamela Anderson's oh-so-cleverly altered "ring" tattoo that now reads Mommy (the "M" replacing, of course, a "T").

But it's not just the Christina Aguileras and Victorian Beckhams who are heading for that cushy chair, says Rachel Fishman-Fedderson of Parenting.com.

"We've got hundreds of readers sending in tattoos that they've gotten to commemorate their children," she told Good Morning America. "The remarkable thing about mom tattoos is how universal they are. They're not just happening in the hipster enclaves on the coasts. They are across the United States."

After all, it's a pretty wide-spread trend. Some 35 percent of 20- to 45-year-olds have least one tattoo, the report added (citing Pew Research Center). And for many more – Barker's a prime example – those tatts have been around long before the kiddos.

Chrystie Corns, sis of The Bachelorette star Ashley Hebert, is another great example, as it were, the ABC News video segment added.

"I wouldn't consider myself alternative," explains Corns, who sports sleeves and clavicle-to-clavicle work. "I still listen to pop music, I watch reality TV. I'm sort of like a normal traditional mom." One who definitely gets "funny looks" while she's taking the kids to the playground.

Still, there's something about making that cherry-popping tattoo a child's nickname or imprint of baby feet that resonates with first-timers, reports BabyCenter.com.

"To them, paying permanent homage to their children seems more acceptable than choosing random tattoos," it reported. "With child-themed tattoos, there's little chance of regret."

Case in point: Sarah Unterbrink, a Virginia Beach mom of three, got three flip-flops on her back. Above each are the names of her three kids. "If I was going to have one, I wanted it to have meaning," she told BabyCenter. "I didn't want to look back and think, 'Why did I get this rose?'"

To be sure, kids are forever (till age 18, at least), so that idea of it being a safer bet – versus, say, a butterfly-laced lower-back "tramp stamp" – strikes a chord.

Still, as popular fail blog Ugliest Tattoos frequently illustrates, serious consideration (both of subject and artist) is highly recommended. Especially if you're going the photo-realistic route.