‘The Pumpkin and the Pantsuit’ Help Parents Explain the Election 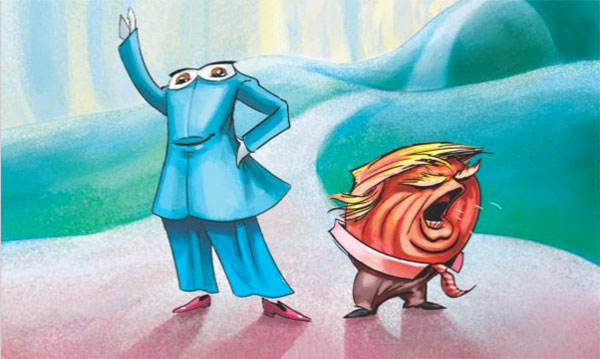 It was one of the most divisive elections in history, with every second of the race dominating television screens and social media.

Voters took sides and engaged in volatile arguments in-person, on the big screen, and in cyberspace. Family members stopped talking to one another, and across the aisle, characters were questioned.

As for the kids, yeah, they saw and heard everything.

In order to help parents struggling to explain the 2016 election to their kids, advertising agency barrettSF worked with the STUDIO to bring to life, The Pumpkin and the Pantsuit, in which an angry orange pumpkin head competing with a powder-blue pantsuit for the highest office in the land.

Inspired by an incredibly recent true story, this cautionary tale is about what happens when two figures with big personalities and big disagreements go after the same seat.

These characters, based on Hillary Clinton and now-President Donald Trump, took a clever crack at explaining to young readers the distinct approaches and ideas each candidate presented throughout their race.

Additionally, after the pumpkin wins, the book goes on. Just like the pantsuit does, and just like the American people must.

Amazon customer Marlene Glass posted the following review, “My daughter was drifting off to sleep tonight after reading this book and she whispered, ‘Mom, I am going to be the purple pantsuit,’ …if that isn’t the best review, I don’t know what could be. Thank you from the bottom of my heart for this.”

“The goal of this book is to teach kids (and remind the rest of us) that losing is only losing if you give up,” Eisner says.

User aptly named Amazon Customer called this story, “A beautiful and much-needed lesson in perseverance and hope for the next generation. This book does not dwell on the political, but more on the values that are applicable to today’s children: anti-bullying, acceptance, and the notion that good things can be born even from the toughest of circumstances.”

After what was an exhausting, convoluted election that has inspired both extreme satisfaction and extreme upset, this book allows readers to reflect on what happened while encouraging both parents and children to keep going.

Purchase a paperback copy for $10.80 on Amazon and at select independent booksellers.  All proceeds will be donated to the Children’s Defense Fund.