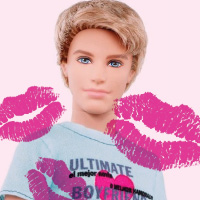 Mattel's iconic dude doll has done a lot of soul searching. You may recall, Ken and Barbie called it quits back in 2004. Just two years later, a contrite Ken was amping up the plastic charm offensive, sporting some sexy board shorts and an ab-hugging white T.

Well. After 50 years into his rocky relationship, Ken Carlson's apparently come to a time-honored conclusion: Let the lady do the talking.

Yep: He's back as Sweet Talkin' Ken. After making his re-debut earlier this year at the 2011 New York Toy Fair, he's hoping to earn his way into the hearts of little girls ages 5-plus everywhere – or at least into their holiday gift stockings.

Decked in an emo-approved powder-blue top, which declares "Ultimate Boyfriend" (not just in English – he's culturally sensitive, too!) and sporting some shiny dirty-blond Bieber locks, Ken's new packaging makes it plain: "YOU make me talk!" It's as simple as pushing – what else? – the big pink heart on his chest. That'll record his profound message of love and remorse. Like, "Barbie, baby, I'm so sorry" (as awesomely demonstrated by Children's Technology Review on YouTube).

But that's not all. Heck no. Tone is everything, right? Right. So, for the playback, you get three options – triggered by pressing one of the buttons at the chiseled small of Ken's back. The first is clearly designed to make high-pitched girl voices sound more Adam's-appled (although when you apply the deeper affect to a guy's voice, it's more robo-creepy than sexy-suave). The second is just your pipes, real-time. And the third? Well, c'mon, gals. No need to kick a guy when he's down.

Of course, as one astute YouTube commenter points out, this blue-eyed fella could just as easily turn into "Trash Talkin' Ken" (browser, beware of cold-hitting the playback at Walmart).

Silver (or sassy) tongued, this $20 novelty surely begs all sorts analysis. But one question remains. Would you snag it for your doe-eyed third grader? Or, more importantly, is Barbie buying it?

The polystyrene queen is as tight-lipped as ever. But we know one thing. You can do your part to Give Ken a Hot New Look, helping him "catch her eye" by changing his taste in hair, clothes and music.