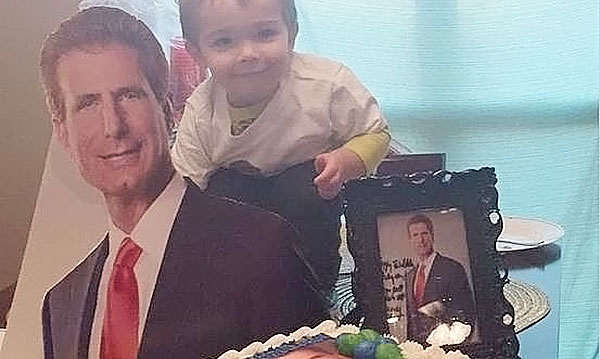 There’s something about personal injury lawyers’ ads. Metro Detroit definitely has a few rock stars. Who hasn’t seen Joumana Kayrouz, with her hallmark long platinum hair and “INJURED?” inquiry, plastered on billboards and buses? Or had their TV or radio beckon them to “CALL SAM” for that Bernstein advantage?

But while their simple slogans are a loony-yet-beloved part of local pop culture (we’re looking at you, Joumana Halloween costumes), we don’t think either of them can claim being the theme for a 2-year-old’s birthday party.

Apparently, Bart’s earnest-yet-emphatic “one call, that’s all” catchphrase did the trick. When the commercials aired, Grayson was “fixated,” as his mom, L’erin Dobra, told The Acadiana Advocate in Louisiana. “When he started talking he would say, ‘one call’ or ‘Bart, Bart, Bart, Morris Bart, Morris Bart,'” she told the paper. “They were not his first words, but they were a close second or third.” Clearly, the kid was hooked.

So for Grayson’s second birthday, mom went big. She got a Bart-emblazoned cake, toddler-sized T-shirt and cutout made up. And she knew just who to call – or, more accurately, contact via getbart.com. Yep: The Dobras invited Bart to the party at their Prairieville, Louisiana home.

While the attorney – whose 65-lawyer firm specializes in car, motorcycle, pedestrian and other accidents – couldn’t attend, he did send Grayson a signed 8-by-10 portrait and some swag like key chains and a New Orleans Pelicans shirt. (Side note: Bart’s a big NBA booster who advocated keeping the team in his hometown when it almost split – for the kids, he told The Times Picayune in 2010.)

After the story went viral last week, a clearly tickled Bart even made a YouTube birthday video just for Grayson, declaring, “I couldn’t be more flattered.” On his firm’s Facebook timeline, among a series of other adorable (yes, in perhaps a first at Metro Parent, we’re using the word “adorable” in correlation to an attorney) posts, he added, “Watch out sports heroes, here come the lawyers!”

And it appears Bart may soon get his chance to fully upstage Mickey Mouse, the star of Grayson’s first birthday, with an actual in-person meeting with the tyke.

“Mr. Bart has been so nice this whole process and he’s extended the offer (to meet) my son many times,” mom told NYDailyNews.com. “We are starting potty training, and what better way to teach him than to let him know if he does, he’ll meet Bart.”

Talk about incentive. Till then, luckily, Grayson has the Morris Bart YouTube channel to tide him over.