A Nebraska father was having a chill day before he was assaulted by a horrific stench. Little did he know the crap was just getting started. 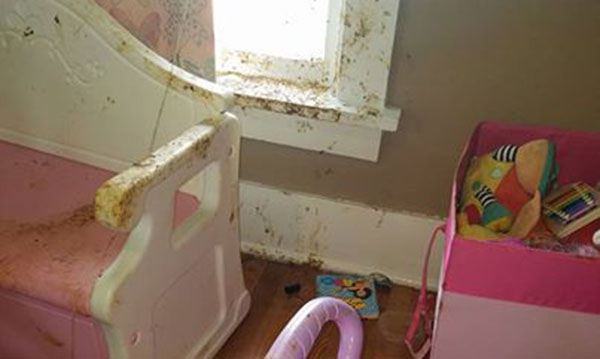 Changing diapers is probably most parents’ least favorite pastime. It’s gross, it reeks and babies often don’t want to cooperate. However, for Jesse Mab-Phae Hill of Omaha, Nebraska, changing a diaper would have been a piece of cake compared to what happened with his daughter.

Hill’s hilariously disgusting Facebook status first caught Oh Mother’s eye in a Huffington Post report. It described a “feces fiasco” of “immense ‘poo-portion’” that became “internet gold” – so we had to forge ahead into Hill’s personal parenting horror story.

It all starts innocently enough. He describes his morning routine: drops son off at school, works out, lets dogs out and goes to relax and watch some YouTube videos in his basement man cave – since his little 2-year-old daughter, Alessandra, was sleeping upstairs. Hill basically had the house to himself. Bliss.

That is, until he decided to head up to grab a piece of cake. That’s when a foul odor grazed his nose. Perhaps the dogs … ? Hill looked around for droppings. Nope. But the stench got stronger near the stairs to the second floor.

That’s when, as Hill tells it, “my blood runs cold.”

“I run up the stairs screaming no, no, no, no, til I get to Alessandra’s room,” he types. “There she is, standing at the baby gate, butt naked, holding her diaper, covered head to toe in her own crap. I’m not talking a little poop here and there on her. I’m talking layered-on globs of human fecal matter covering her arms, legs, face and hair. It’s bad.”

He says he was tempted to close the door and pretend he didn’t notice until his wife, Mayra, got home – but with Mother’s Day around the corner, thought better of the move. Plus, as he sensibly puts it, “I didn’t want to be a dick.”

What happens next is a classic comedy of errors, as Hill draws readers into his poo-pocalyptic nightmare that’s equal parts horrific and hilarious.

He tries picking up his soiled child with four fingers to haul her to the tub. Of course, Alessandra keeps trying to touch daddy, Hill says, prompting him to “scream like a prepubescent girl and dodge her.”

Twenty minutes later, to Hill’s great relief, his tyke was tidy again – but her room, on the other hand, was … well, Hill uses these colorful descriptions: “a scene straight out of a German fetish dream” and “Hurricane Sh*trina, if you will.” The walls, windows, toys, floor, bed – all smeared with poo.

Naturally, it’s all thoroughly documented in photos with the post (warning: don’t browse while you’re eating).

After cleaning up Alessandra’s room, Hill said the damage totaled “two rolls of paper towels, five stolen gym towels, a bottle of Pine Sol, a bottle of bleach, a big bag of crap-covered toys – and, two-and-a-half hours later, her room still smells like a dumpster fire.”

Since the post went viral, Hill decided to start his own daddy blog to talk about his other adventures as a father.

I feel bad for Hill, but at the same time, this is an awesome story to tell for years to come – and Alessandra is going to have one embarrassing legacy to deal with for the rest of her life.

Has this ever happened to you or your kids? How did you react? Tell us in the comments!