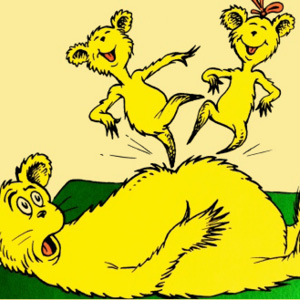 Who knew teaching your kid to read with a little Seuss story could be so controversial?

Apparently one Toronto resident feels this way, and is causing quite a stir trying to get a so-called "flop" dropped and chopped from library shelves everywhere.

A concerned patron asked that Hop on Pop, the 1963 Dr. Seuss classic, be yanked from the shelves of a Toronto library. The complaint: "violent" content toward young readers – and a dark message hiding inside every copy, according to a report from CTV News Toronto.

The late Theodor Seuss Geisel is criticized for writing a book that is not only notorious for its rhymes, but also encouraging kids to "hop on pop" and, essentially, beat their fathers. Not only that, CTV notes, but the patron also demanded a public apology from the Toronto Public Library to local fathers – and that the library pay money for any harm caused by the book's disturbed meaning.

A little ridiculous, you say? You're in good company.

"I read Hop on Pop countless times growing up and never once thought about violence against my father," shares Michael Di Giacomi, a commenter on CTV. Another, Miss Ann Thrope adds, "Did this dad even read the book? The hop-pop rhyme set is merely one of the many unrelated rhyme sets."

In fact, the children in the book are actually told not to hop on pop, notes an article by New York publisher Melville House. Perhaps some find pop's annoyed, "STOP. You must not hop on Pop." remark isn't a strong enough disciplinary example for kids? (Incidentally, the entire hopping incident lasts all of two pages, and dad gets the last word.)

So where do you draw the line? Does Hop on Pop belong on a list of banned or challenged books? And what about other Seuss classics? Could Green Eggs and Ham be considered a health safety violation for promoting discolored and rotten foods – and is Go, Dog, Go too bossy and overdue for a politer rewrite, wonders Jeanna Sager on parenting blog The Stir?

Back in Toronto: The library review committee takes each book complaint very seriously, CTV reported – and finds it surprising when an award-winning book is brought to their attention for its content.

Perhaps not as surprisingly, the fuss over Hop on Pop's violence-promotion has died down. Members of the committee analyzed the book for general content and reputation of the author – and quickly determined that Hop on Pop will remain on library shelves for many more generations to come.