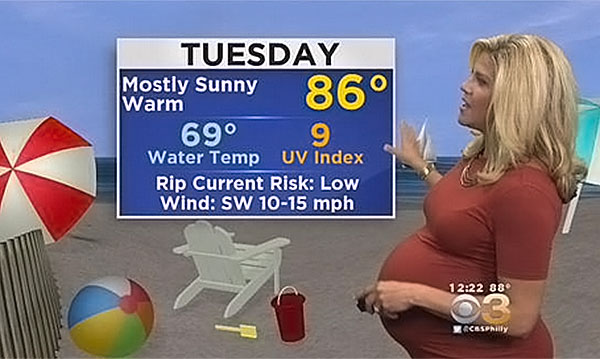 Another day, another woman being cut down for how she looks when she’s pregnant.

It’s bad enough women have to face a constant barrage of comments about their weight and appearance when they aren’t expecting – take this week’s latest body-shaming news item as one of countless examples. But pregnant women, too, apparently need to avoid the public eye unless they plan on looking perfect.

Katie Fehlinger, a meteorologist at the CBS 3 Philly news station in Philadelphia, recently took to social media to respond to viewers who have been attacking her pregnant appearance, Yahoo Parenting reports.

Fehlinger, who is around 35 weeks pregnant and expecting twins, told Yahoo that the increasingly rude comments gave her a moment of clarity and she finally got “fed up.”

“The nature of my job makes me an easy target for criticism. I will always understand that, and I will most typically just ignore it. However, after someone blatantly called me a ‘sausage in casing’ and another declared that ‘sticking your pregnant abdomen out like that is disgusting,’ I felt a need to draw a line and speak up,” she wrote in a post on her Facebook page, which got nearly 25,000 “likes” and more than 2,000 shares.

Her post continued, “Everyone’s right to their opinion is important, but so are manners. And while rude comments like these will never make me feel the need to change anything about myself, I find a bigger underlying issue here. These particular nasty-grams were directed at a pregnant woman. So this little manifesto of sorts is dedicated to every mother out there – other pregnant moms-to-be, moms reading this while their toddlers play on the swing set, moms whose kids have long since gone off to college … You are beautiful.”

We’re glad Fehlinger stood up for herself – and other pregnant moms – to her critical viewers. We really can’t imagine who would take the time to even think such negative thoughts about an expecting mom’s appearance, much less go and post their vitriol on social media or elsewhere for the world to see.

As she says herself, she doesn’t care how inappropriate people may think she looks because her goal is to deliver two healthy babies.

“I will gladly gain 50 pounds & suffer sleepless, uncomfortable nights if it means upping my chances to deliver 2 healthy baby girls. Now it’s about more than aesthetics,” she wrote in her post. “I want these babies to have the best start possible. And that hopefully means my belly that ‘looks like it’s about to explode!’ will continue to grow the next few weeks.”

Fehlinger’s story, of course, is just one of several recent accounts of pregnancy body-shaming. Kim Kardashian – who was harshly criticized for weight gain during her first pregnancy – was in the news earlier this month after posting a nude photo of herself on Instagram showing her growing bump.

And actress/model Jaime King, who gave birth to her second son in July, apparently also faced body-shaming while pregnant but about being too skinny, she told People Magazine.

“I’ve seen it happen with other pregnant women in this business too – we’re either too thin or put on too much weight. But every woman’s body is different … all that matters is that you’re taking care of the nutrition for yourself and your child,” she said in the article.

These, of course, are just the stories that take place in the public eye. Is every expectant mom being judged? Don’t new parents have enough to worry about without wondering whether random strangers find their belly “disgusting”?

Here’s what we find disgusting: The idea that a pregnant woman’s weight is up for public debate or commentary.

Did you ever face body-shaming while pregnant or know someone who has? Tell us in the comments.