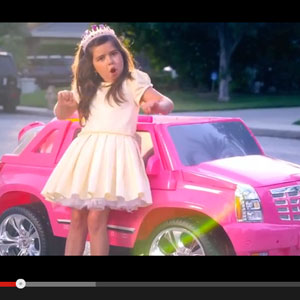 When it comes to kids, acting “more mature than your age” can be a positive thing. This, however, is not one of those cases.

Singer and rapper Sophia Grace, 10, and her younger cousin Rosie are the stars of a new music video for Sophia Grace’s first original song, “Girls Just Gotta Have Fun.”

Do the names sound familiar? You may remember the British girls from their appearance on the Ellen DeGeneres Show covering “Super Bass” by Nicki Minaj. That’s where they gained their “claim to fame,” after the popular TV host picked up the girls’ 2011 viral home video – and they continue to appear on the show once a week, it seems.

The release of the young starlet’s own song and music video – complete with a flashy pink kiddy car, DJ’ed dance party and girly bling galore – has created quite the debate: Are these kids too young to be releasing such an over-the-top music video – or is it just innocent fun for little girls?

There’s been concern the video is too extreme (and indulged) for these little princesses. I mean, just watch for yourself. This pint-sized diva spits attitude – not to mention, sits on top of her own throne:

According to popular CafeMom blog The Stir, “‘Girls Just Gotta Have Fun’ is catchy and kind of fun, until you remember the age of the girl singing. The tiaras, the makeup and the attitude are all a bit much for a child.”

Sophia Grace seems to brush off that notion with her lyrics : “It’s the princess swagger, moves like Jagger/Haters gonna hate, they gonna chit-chit chatter.”

Would you want your daughter to act like this? The entitled behavior captured in the video has many miffed moms saying, “Heck no.”

“Sophia Grace may be a perfectly sweet little girl when the cameras are off and she isn’t performing, but my daughter doesn’t know that,” The Stir’s Sasha Brown-Worsham writes. She goes on to say Sophia Grace’s behavior is “actually just poor.”

Sophia Grace raps about going to the mall to buy clothes, name-drops Ellen DeGeneres and Nicki Minaj, and, of course, disses a boy.

“Girls just want to have fun, but she treats the boy in the video in a really nasty and snotty way,” The Stir commenter Gypsyqueen4life says. “She is bragging about who she knows, all that she has, what she does, etc. It definitely sends the wrong messages.”

Huffington Post commenter bigbowser88 is way harsher, saying, “Might as well start saving money to send them to rehab.”

Are these kids the next Lindsay Lohan or Britney Spears? Let’s hope not. But Sophia Grace could become a successful child star with the help of her fans – who seem to love the video.

AmazedByYou remarks on HuffPo: “These two girls are beyond cute and adorable.”

And chippergirl27 chimes in, “That was EPIC! She doesn’t have the best voice in the world, but it’s something she loves to do. I think it’s great that she turned this song into a kid-friendly version. Even the video itself can relate to kids just having fun. Looks like she had a great time with this.”

Maybe the girls were just having fun. But they’re definitely acting much older than 10 – and snooty, at that. At Oh Mother, we’re not so sure this one’s setting a great example for kids.