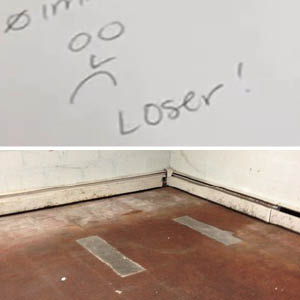 Undoubtedly one of the most important and fulfilling jobs on earth is being a mother. There are some heavy choices parents have to make when if comes to raising their children – to breast-feed or to not breast-feed, to vaccinate or to not vaccinate.

Imagine the shock and dismay that some mothers experience being the best mothers they know how to be. Two moms recently found out what it feels like to suffer from their practices as parents.

Bobbi Bockoras, who has worked in Pennsylvania bottling plant, Saint-Gobain Verallia for six years, filed a civil complaint against her employer and an EEOC charge on the basis of discrimination.

After the birth of her second child, Bockoras went back to work – as a mother who decided to breast-feed. Initially, she was told she could pump her breast milk in a bathroom, which is unsanitary – and illegal.

According to an American Civil Liberties Union release, "A new provision of the Affordable Care Act requires employers of hourly employees to provide unpaid breaks and a clean and private location, other than a restroom, in which to pump breast milk. It also prohibits employers from retaliating against workers who complain about lack of compliance."

So, instead of the bathroom, Bockaras says she was told she could pump in the first aid room where she was reportedly "frequently interrupted by male coworkers pounding on the door and yelling." Her final stop was an old locker room, which can be seen in this article at ThinkProgress.org, where she ended up pumping breast milk in the 106-degree room while sitting on a filthy floor covered in dirt and dead bugs.

After Bockoras complained about the locker room ordeal, she was moved from day shift to a rotating schedule "that frequently required her to work an overnight shift, which disrupted her ability to breastfeed or produce enough milk for her baby," according to the ACLU release.

Bockaras' employer denied her request to be moved back to the day shift – and also did nothing about the harassment from coworkers that she reported.

The ACLU, the Women's Law Project and the New York office of Debevoise and Plimpton LLP are representing Bockaras pro bono.

South Carolina mommy of three Katie Smart got a dose of harassment herself, but not on behalf of coworkers. Smart's 9-month-old son twisted his ankle, according to an article on The Stir. He had a fever, as well, so as a precaution, she took him to Palmetto Health's Children's Hospital.

Smart noticed a note that was left behind by a nurse while her son was being examined. The note read: "235; need to fx fever; 0 immunizations ��_ Loser!"

Katie's husband, Trevor, told WIS reporter Brett Buffington that kind of behavior is unacceptable and unprofessional. Mom also told WIS she felt like she was being judged.

Smart and her husband decided not to have their children vaccinated after researching the ingredients of vaccinations. The Smarts filed a complaint with the hospital after the note was left behind.

In an email to WIS, Tammie Epps, spokesperson for Palmetto Health wrote, "The behavior of our team member in this situation does not reflect Palmetto Health's standards of behavior, and we sincerely apologize for what happened."

Epps went on to say that the person involved has been placed on administrative leave pending an investigation.

Both breast-feeding and vaccines produce strong reactions from society, so it's no surprise that the blogosphere is buzzing.

When it comes to Bockaras' case, commenter WellNowDear on RawStory.com says, "No harassment should EVER be allowed on the job – PERIOD – by any employee against another. That being said, the factory certainly shouldn't have nasty storage rooms but, sanitary conditions may not be possible. The lady knew the conditions where she worked before giving birth. A wise decision may have been to look for another job while on leave."

On the other hand, Ennealogic says, "Unless there's more to the story in favor of the factory's side, I truly hope this lady wins the lawsuit, and wins big. It is hard enough to go back to work with a new baby, without being harassed and disrespected in the workplace."

As for Smart's decision to opt-out of vaccinating her child, commenter Laurie C says, "Life is hard enough for the little ones. Why stack the deck against them by not vaccinating? Just sayin'. The nurse however, was very unprofessional! I doubt she will be there long. Wondering if this is the first time her 'personality' has clashed."

Commenter Ted S. disagrees: "The other children and adults who are impacted by the non-immunized child are the losers – so yes the parents are losers … We all lose when parents fail to protect their children," he says.

So, where do you stand on these issues?

Put your putters to the turf in 2022 at one of these miniature golf courses in metro Detroit and Ann Arbor.
Read more
Advice