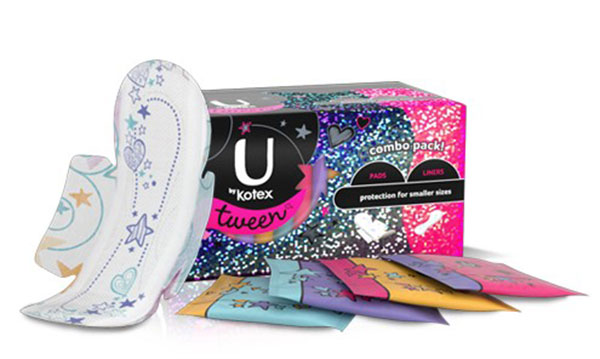 Puberty can be a frightening time for parents and kids alike, and media often reports that young girls hit that milestone earlier these days. It seems savvy marketers have noticed, too.

Parenting.com’s blog recently dusted off the topic of U by Kotex Tween – a series of maxi pads and liners geared toward younger girls. It’s actually not new news: The line, aimed at gals ages 8-12, debuted in 2011, as noted in a New York Times article the post links to. But clearly, the subject still ruffles feathers.

Parenting’s headline says it all: “Maxi Pads for Eight-Year-Olds? Yikes!” Maxi pads beautified with stars, hearts and encased in sparkly boxes, no less. And granted, from the onset, that had critics questioning whether a separate line is really necessary – or if the pads were just another marketing ploy.

Back in 2011, Mommyish blogger Koa Beck declared the new product was “a way to torture mothers of tweens.” She felt Kotex’s willingness to “ruthlessly capitalize” on “menstruating 8-year-olds isn’t surprising,” adding, “Perhaps using the glitter and the doodles is a way to get girls excited about other products now being pumped into the tween market, like makeup and panties.”

But even then, Mommyish readers didn’t agree.

“I’m sorry, this is just stupid,” commenter Sarah said. “My sister got her period when she was 8, and there was nothing that fit her at the time, so she would be constantly wadding up tissues in her vagina and feeling insecure.” That’s in reference to another selling point: These pads are about “18 percent shorter and narrower” than the usual, the NY Times reported. Or, as Kotex puts it, “designed with her in mind.”

While it may be inconvenient for girls’ childhood innocence to get their periods at such an early age, the phenomenon’s on the rise.

A 2010 study published in Pediatrics says about 16 percent of American girls experience menarche at age 7, with another 31 percent at age 8. For many parents, that’s about four to six years earlier than they thought they’d have to sit their girl down to have the “your body’s changing” talk. Don’t wait for sex ed. Kotex urges moms to pick and stick to a date in the near future to discuss their daughters’ monthlies. Put it off and she’s more likely to get a surprise at school when you’re not on hand – and neither is a pad.

The line launched over four years ago, but in the meantime, many more tweens have begun their periods. And they and their mothers largely seem to rave that Kotex’s smaller pads have made menses easier to bear.

Susan Kim, author of Flow: The Cultural Story of Menstruation, was initially put off when U by Kotex Tween hit the shelves. “What punched me in the gut is that the age of menarche had dropped so precipitously,” she told the NY Times. “My first reaction was, ‘Oh my gosh, a period kit for an 8 year old – eek!'”

But she acknowledged there’s a huge need for the product and applauded Kotex’s approach. “It was not that long ago that girls used to pass around the Judy Blume book Are You There God? It’s Me, Margaret, because it addressed stigmatized topics including menstruation,” Kim added. “It was such contraband material.”

Yes: The boxes are decked out in glittery bright colors, and the maxi pads are embellished with multi-colored hearts, swirls and stars. The Times even quipped back in 2011 that the products look as if they belong on a Disney Channel set.

While I don’t deny kiddy-catered marketing schemes are rampant, I don’t see the harm in decorated maxi pads – considering they’re products proving a necessity for a growing group of younger girls. If prettified sanitary napkins make them less scary and make tweens more confident to wear them, then slap on the adornments.

While it shouldn’t take a well-known feminine-product company’s launch of snazzy maxi pads and liners to urge mothers to tackle the topic with their young daughters, perhaps it’ll persuade moms to step up to the plate all the quicker, too.

What do you think? Are the stereotypically decorated feminine pads too much too soon, or is Kotex’s marketing a savvy way to ignite better feminine hygiene and discussion on the topic of menstruation, which still often gets its share of stigma?