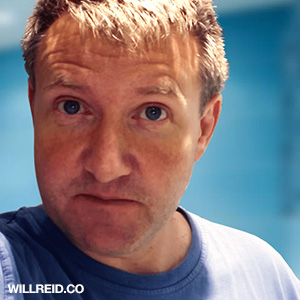 Snark is the time-honored turf of teens. So is slacking – especially when it comes to household chores. It's a blend one British father knows too well. So this dad merged both issues in a budding line of videos that might be the perfect cup of tea for parents of adolescents on this side of the pond, too.

His name is Will Reid. He pegs himself as an "ordinary guy, from ordinary street, with ordinary job and just an ordinary dad" on his website. That's right: He's already turned himself into a nice little brand, complete with goofy T-shirts breaking down his tutorials and mugs with QR codes to the vids. But before all that, he was just peeved his kids wouldn't replace the T.P.

That led to his late-summer debut: "Toilet Roll Changing – Teenage Instructional Video #1." In it, Reid, blue eyes dancing, calmly admits defeat in convincing his kids to perform this bathroom task face-to-face. "I've come up with the idea of using social media to try to reach you," he says. "I know this is a difficult one," he says, drawing in his breath, "so, James and Beth, please pay attention."

After name-dropping his spawn, Reid breaks down the process in four painfully simple steps, being mindful to identify mystifying elements such as "a toilet roll holder" and actions such as slipping the used tube off the holder's hook.

Throngs of long-suffering parents and other YouTube fans rejoiced, with cries of "brilliant" and one even calling for the bloke to do a TED Talk. Some offered their own puzzled sarcasm, such as, "My roll is a different colour, will I get compatibility (t)issues?" Another requested "how to put dirty clothes in the hamper" for video No. 2. Instead, Reid opted for the dishwasher head-scratcher:

After gathering up soiled dishes from around the house, he helpfully points out that the wrappers do not go in the washer – and sometimes there's "congealed" goo to rinse out, first. The loading is just beginner's stuff, though.

For the advanced level, he demonstrates where to pop in a soap tab and how to press the buttons. Confused? "It looks like the buttons on your Xbox or PlayStation that make it work – or, effectively, boot it up."

Whether you're applauding or rolling your eyes, it's clear the videos have resonated with viewers. "The first one was spontaneous and meant as a joke," Reid admits in the description of his second video. After six days, it's only creeping toward 218,000 views so far. Still, he's jumping on the marketing bandwagon.

So, even after Reid's videos fade into viral obscurity, you can ensure your kids won't forget the finer points of changing toilet paper with a pictorial tutorial T-shirt – of the "finest quality" heavyweight ring-spun cotton – for $32. Consider it an investment in a lecture that lasts.