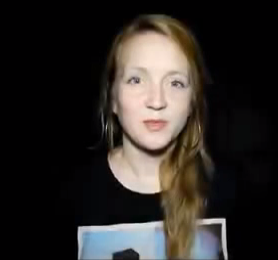 For six months, she squirreled away in public restroom stalls to breastfeed her daughter. And, she told Huffington Post, it took a few more years to finally publicly voice her private struggle.

But in the four days since UK spoken-word artist Hollie McNish posted a powerful poem on YouTube, it's quickly logged north of 254,000 views – and has parents piping up in support, both in the UK and here across the pond.

McNish's poem is called, fittingly enough, "Embarrassed." Set against a simple black background, the plucky, pale young mom ponders her strange – and, she now feels, absurd – brush with shame. In a gentle cockney lilt, she paints a pretty raw, honest picture. Watch for yourself:

"Six months of her life sat sitting on lids / Sipping on her milk, nostrils sniffing up piss," McNish says in the 3:37-minute video – reciting from a poem she says she wrote during a stall nursing-session after her little girl had dozed off. "I'm getting tired of discretion and being 'polite' as my baby's first sips are drowned – drenched in shite."

It's an awkward conundrum for many nursing moms in the United States, too. In the first few months, breastfeeding babies need seven to a dozen hits of mother's milk a day. So if you're out and about with your infant, that poses obvious questions – and challenges. Where do you go? Do you sit down in plain sight and finagle a towel or nursing canopy over your tyke and exposed breast? Or are you comfortable simply popping out the source?

Here in Michigan, we're currently one of 28 states where breastfeeding is exempt from "public indecency" laws, the National Conference of State Legislatures notes. Yet, it adds, we're one of only five states that doesn't have clear laws that "allow women to breastfeed in any public or private location." That hasn't deterred some moms for letting nature take its course – including a well-circulated story about a breastfeeding "flash mob" of 11 moms at The Somerset Collection in Troy that was disbanded by mall security back in late 2011.

Yet while breastfeeding is more-or-less protected (in Somerset's defense, it reportedly said the "demonstrating/protesting" was the issue, not the breastfeeding), it remains a tough – and uncomfortable – call for some mums. As McNish puts it, the mentality she bought into was, "There might be young children or a nervous man seeing this small piece of flesh that they weren't quite expecting."

The hoop-earring'ed artist has choice words for the hypocrisy she perceives, too – "in this country of billboards covered in tits and family newsagents' magazines full of it," as she bluntly puts it. She grits her teeth, too, over the marketing of pricier formula as a superior meal – or, at least, an answer for moms tired of battling derisive glances.

Not surprisingly, there's plenty of debate swirling on both sides, in the comments section of the vid – including some spats over pumping vs. breastfeeding. Overwhelmingly, though, the words "thank you" appear. Or, as one parent with the username msk5410 put it, "Give 'em hell! Recall looks of disgust given to my wife as she breastfed our daughter."

Clearly, McNish – whose daughter is now 3, Huff Po reported – isn't alone in doing something natural and feeling totally awkward about it. "That we and the U.S. are so bloody scared of it. It's weird," she writes in the preamble to her video. "I find our culture weird."

Wary of indoor dining but tired of eating at home? Consider a meal at one of these local spots that offer outdoor dining in the winter.
Read more
Guides