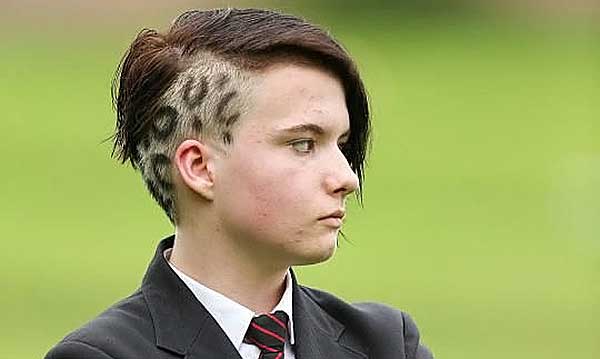 Hair experimentation is a rite of passage for many kids. I still recall one of my classmate’s extreme styles. Her hair stood straight up in twisted black spikes, imitating the Statue of Liberty all over, complete with pale foundation for a stark contrast.

The district I lived in – Van Buren Public Schools – allowed it. In fact, the girl took her school picture with the same hairstyle and makeup. In a public school like mine, the dress code had its restrictions, with an ounce of freedom.

But what about schools that call for uniforms and minimal hair changes? The dress code is stricter – as 13-year-old Lauren Mcdowell discovered the hard way.

The teen recently walked into Forge Valley School in Sheffield, United Kingdom sporting a eye-grabbing cut: One side of her head had standard short brown hair, but the other was shaved and dyed blonde, accented with brown leopard spots. It was a style she’d reportedly wanted for a while. The result? Lauren was sent home. The new ‘do violated school policy.

Her mom, Yvonne Mcdowell, was furious. “It’s a breach of my daughter’s human rights,” the mother of six said in a News.com.au article. “She is my child and not theirs. She didn’t sign away her rights when she started at school.”

Lauren did, however, attend a school with a policy stating, “The school does not permit children to have extreme haircuts or colour.”

In the article, Mcdowell said she did not know about the policy. Dale Barrowclough, the head teacher of the school, countered that a downloadable version of the dress code policy is available on the school’s website.

Is mom at fault for not checking? Did the school fail to inform parents that it was available? “The policy is communicated to parents frequently,” Barrowclough said in the News.com.au article.

There’s a difference between clearly not knowing and neglecting to know. Schools’ rules vary. And if Mcdowell disagrees with the policy, she can certainly take her daughter to a school with different rules.

This story recalls one in the United States back in January. At a high school dance, a supervisor asked a teen to cover her shoulders. Utah station KUTV says the teen was aware of the school’s policy – and made sure her dress fit the code. It surprised her that it was criticized.

By contrast, in the Mcdowell case, it seems mom (maybe daughter, too) failed to learn the school’s dress code.

There’s nothing wrong with expressing yourself through fashion and hair. But when there are limitations, it’s best to follow those limits.

“Part of going to school is learning how to adhere to certain guidelines and boundaries,” teen behavior expert Josh Shipp told Yahoo Parenting. “Within those boundaries, you can be as creative and expressive as you wish. Just respect the boundaries.”

Still, sending a child home because of appearance doesn’t help with getting an education. And it’s not the only story like this out of the UK this month. An academy in Nottingham reportedly sent 50 students home on the first day for not wearing the correct shoes based on policy.

“I don’t understand how they can put shoes before education,” said Perri Jones, a mother of one of the students sent home.

But is that really the best approach, on the school’s part? Alternatively, why not let the kids stay in class for the day but call up their parents to address the issue? The students don’t miss out on the lessons, and the situation is handled.

Mcdowell placed her daughter in a school that prohibits dramatic changes to appearances. It’s her responsibility for her daughter to still express herself while following protocol. But it’s the school’s responsibility to allow students time in school and find a way to approach any distraction without disrupting the child’s education.