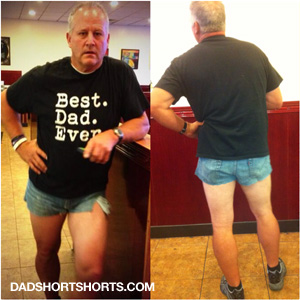 Some parents ground their children, some revoke TV privileges and others reduce allowances. These days, parents even confiscate cell phones in the name of teaching children a lesson.

Not Utah father of seven, Scott Mackintosh. Faced with the dilemma on how to teach his teenage daughter Myley a lesson on being modest when she refused to change out of her short shorts, he altered a pair of his own jeans, according to the New York Daily News.

A Fox news interview revealed that Mackintosh went out with his family after cutting himself a new pair of short shorts. The family went to dinner, played miniature golf and got ice cream. But, by the time they got to the ice cream shop, Myley had enough and refused to step inside for a treat.

Paired with a T-shirt dawning the words "Best. Dad. Ever." Mackintosh and his short shorts sent the world of social media into frenzy, starting with his wife's blog, Becky Mack's Blog of Mild Chaos, according to People magazine online, and his children, without his knowledge posted the photos of him on the internet, according to USA Today. The latest attention stems from television interviews including FOX News, ABC News, and NBC news.

Stefania said, "Good job! This is absolutely hilarious. Sometimes it's the only time kids can hear you!"

KacieG was not as enthused, "I feel like if she was younger maybe this would have been okay. The fact is she is 19 and I would say she is old to dress herself by now. Once they are that age you just have to hope you did a good enough job raising them so that they can make smart decisions. I am sure she looked fine, just the family is wayyyy to conservative."

In a Fox news interview with Greta Van Susteren, Mackintosh said that he didn't expect it to go that far and he won't be dressing like that again. In that same interview, the host asked Myley her view on wearing short shorts now.

"I think it's definitely something that I'll think about now, just because I know that it means so much to my dad," Myley said.

Only time will tell if the lesson truly kicked in.

Here are tips from the nation’s leading scholars on race, democracy and inequality.
Read more
Advice