Would You Wear These High-Waist Double Jeans?

They could help cover your mom belly, right? Still, we'll leave these where we found them. 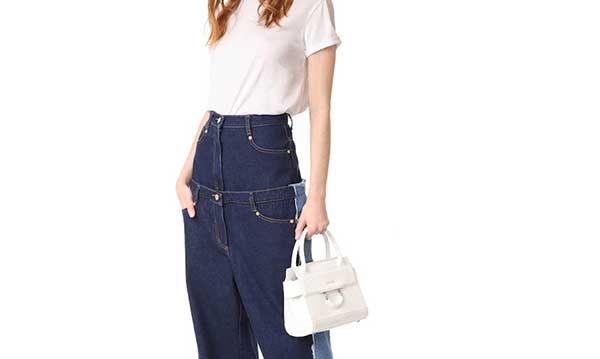 For as curvy as I’ve always been, I had a flatter tummy than you might expect. But once I gave birth that skin got a lot looser and, well, my tummy isn’t so flat these days.

So I will admit, the first pair of post-baby jeans I purchased to get by until I fit into my old jeans (five months later and no luck on that front, but we won’t get into that topic!) have a higher waist than the jeans I used to wear. There’s a beauty to those jeans – mainly that my underwear doesn’t show if I bend over too much.

While there’s something nice about a high-waist, I don’t see a point in having high-waist double jeans – like the ones created by London designer Natasha Zinko. It’s like we’re taking mom jeans a bit too far – yet again.

While I’d like to think these jeans, which can be purchased on Shopbop for $695, are a joke, they are not. Yes: They are $695, and yes, they are currently sold out.

This has to be a joke, right? For all I know, though, this reviewer could be walking around California in her weird take on mom jeans and some killer high heels.

Speaking of which, want to know the best thing about the Shopbop product photo? The model’s shoes. I’d love a pair of those. They can keep the jeans, though. This mama may have lost her flat tummy to motherhood, but I haven’t totally lost my style!

What do you think of these jeans? Would you rock them or kick them to the curb? Tell us in comments.

Lace up your skates and enjoy an evening of old-school fun with your family at one near you.
Read more
Health

One-third of U.S. children take nutritional supplements — but whether they need to is another question. Get yourself educated on children's vitamins.
Read more
You