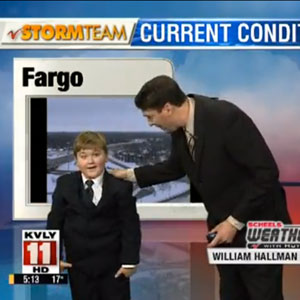 Donning a slightly oversized suit, 9-year-old William Hallman from North Dakota presented the weather on Fargo’s news station like a pro – and it’s created quite a buzz.

“Weather Kid” William appeared on Valley News KVLY on Thursday, Feb. 7, full of pep and ready to tell the good viewers at home what to expect outside. The video of the forecast on YouTube had 678,297 views at the time Oh Mother checked, and the number keeps ticking upward, making William a pretty popular kid.

Why is this forecast so darn cute? William comes on screen with flare, doing a little jig and pointing to the temperatures like a true weatherman with pizzazz.

“Have you done this before, William?” weatherman Hutch Johnson asks, surprised at the kid’s zeal. “Eh, a little bit,” William responds nonchalantly.

See William present the weather for yourself:

Don’t you just want to pinch his cheeks? The most adorably awkward thing about William’s weather predictions? He stands in front of the graphics and doesn’t face the camera – making it that much more darling. Although Hutch has to move him over a few times, he does a heck of a job of presenting the weather – and he’s much cuter than Hutch, too.

William’s mom Sally told InForum, a news website in the Fargo-Moorhead area, that William got interested in weather when he caught a tornado warning in May 2011.

“Ever since then, he’s been watching the weather,” mom told the site.

So what’s next for this animated weather kid? He’s caught the eye of some celebrities. Mom Sally told InForum that they’ve been contacted by The Ellen DeGeneres Show, and he’s been invited to present the weather on the Today Show with Al Roker himself.

Mom joked about all of the attention in the InForum article, saying, “I just don’t want him to get too big of a head, you know?”

The busy guy says he has Valentine’s Day plans, ladies, according to his weather forecast – but we’ll keep an eye out for William on the Today Show.

Here are tips from the nation’s leading scholars on race, democracy and inequality.
Read more
You