What’s Wrong With This Teacher’s Outfit?

A Georgia teacher is being shamed for her curve-hugging clothes but some say it's her figure that has people so fumed. 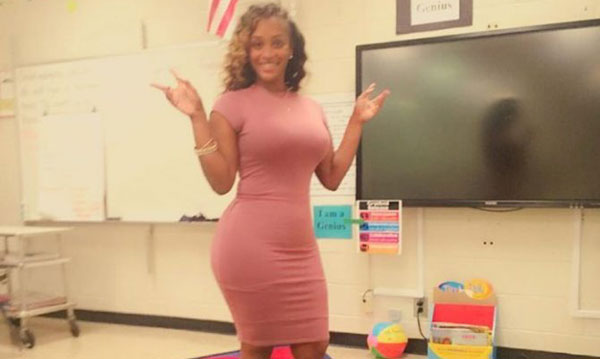 What started as a simple outfit-share on social media has turned into a national debate on how teachers should dress.

Patrice Brown is a fourth-grade teacher in Georgia who sometimes shared her “outfit of the day” on her Instagram account. People started taking notice – but not necessarily in a good way.

Users began sharing her photo with the hashtag #TeacherBae over the weekend and while some comments are positive, many people are shaming her for wearing clothing they say is inappropriate for school, Yahoo News reports.

The main outfit in question? A form-fitting, high-necked, knee-length dress. Other outfits were similar – stylish but otherwise unremarkable except for being worn by an attractive woman with a curvy figure. That, apparently, is more than people can handle.

“Her tight dress is not professional dress. Her body is banging but her clothing choice needs some maturity,” Dreka1913 wrote on Twitter.

Others turned the issue around on critics by sharing photos of (white, less curvy) women in similar attire and asking if it still looked problematic.

But not everyone agrees.

“Look, I taught for many, many years and this dress is simply too tight for classroom attire,” Dee Moscoso commented on a Huffington Post article about the issue. “It has nothing to do with her skin color or her curves.”

But would the situation really have gone viral if not for Brown’s figure? And no matter her body shape, why does a national conversation develop in response to a woman’s outfit? Brown and teachers everywhere are hired to educate our kids – a task that is hardly affected by their attire, whether one person finds it distracting or otherwise.

On the bright side, people are calling out the negative comments for what they are.

“Y’all will take any educated, independent woman and turn her into a sexualized object. I’m so sick of this,” Saisailu97 wrote on Twitter.

Unfortunately, though, the ordeal may have Brown in hot water with her district, according to the Huffington Post article. The Atlanta Public School district issued a statement saying Brown was “given guidance” on the employee dress code, social media use and the state’s ethics code. It also said Brown has been cooperative “in addressing her presence on social media.”

Would you have a problem with a teacher wearing a dress like the one in the photo? Or were people just being overly sensitive? Tell us in the comments.