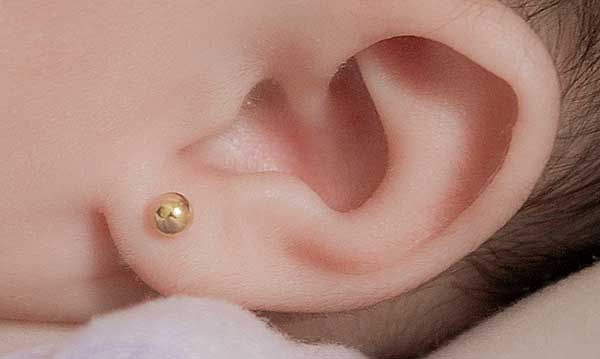 Why is it that when someone doesn’t like something, their first response is to try to ban it for everyone? Take the actions of U.K. resident, Susan Ingram, for example. She started a petition to make piercing an infant or toddler’s ears illegal, The Stir reports. The petition is just shy of its goal of 45,000 signatures.

So, why did this woman decide that the government needed to regulate what parents do with their baby’s ears? She thinks that it’s a form of child abuse.

“It’s a form of child cruelty,” the petition reads. “Severe pain and fear is inflicted upon the infants unnecessarily. It serves no purpose other than to satisfy the parent’s vanity. Other forms of physically harming children are illegal – this should be no different.”

Severe pain and child cruelty? We’re not so sure.

Ear piercings, and other body mods, have been around for centuries in different cultures around the world. Even today, many Spanish and Hispanic people view ear piercing as a sign of femininity and pierce their daughter’s ears shortly after birth, according to The Stir. Hindu children also get their ear lobes pierced during their early months or years of life, because it is believed to maintain a girl’s menstrual regularity, aids in the cure of some diseases and maintains the flow of electric current in the human body.

Still, some parents get their infant’s ears pierced so the kid won’t remember it, and so the parents can take care of it as it heals, rather than risking infection when the child forgets to take care of the piercing when they are older.

While we are pretty sure that these pro-piercing parents are loving and doting, we get Ingram’s reasoning, too. There’s no way an infant could possibly know what’s coming after the alcohol swab, and piercings can hurt, but no more than a shot or a bee sting.

With that being said, parents should be allowed to make this decision on their own. Piercings aren’t permanent in the same way that tattoos are. Take out the earrings and in a few months that hole will be nothing but a small dot.

As a person with piercings and tattoos, I would personally wait to see what my child wants and when the time is right, I would take them to a tattoo and piercing parlor with a trained piercer.

But that’s just me.

Should there be a minimum age on ear piercing? Did you get your infant’s ears pierced or do you think that it should be illegal? Tell us in the comments section below.

Take a road trip to one of these great Midwest destinations including Traverse City, Hocking Hills and St. Louis.
Read more
Indoors