Woman to Pass Out Obesity Letters to 'Obese' Kids For Halloween 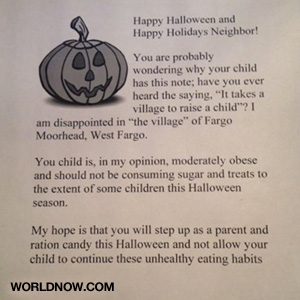 It feels like it was just yesterday we were telling you about the school that sent a letter home regarding an 11-year-old girl's weight. Well, a North Dakota woman is giving that same idea a whirl – except she's giving the letters out as a Halloween "treat."

No joke. The lady has a letter – donning a pumpkin – typed up that opens with, "Happy Halloween and Happy Holidays Neighbor!" While it starts out seemingly sweet, she's actually aiming to bewitch kids she deems "moderately obese" into not eating candy by slipping this note into their Halloween treat bags for their parents to read.

"Your child is, in my opinion, moderately obese and should not be consuming sugar and treats to the extent of some children this Halloween season," the woman's letter reads. "My hope is that you will step up as a parent and ration candy this Halloween and not allow your child to continue these unhealthy eating habits."

Could kids go without eating pounds of candy? Sure. But is it up to this woman to decide which children are obese and should not get a Halloween treat?

She seems to think so. In an interview with a local North Dakota radio station, she explained, "I just want to send a message to the parents of kids that are really overweight," a Valley News Live article notes. "I think it's just really irresponsible of parents to send them out looking for free candy just 'cause all the other kids are doing it."

Lately, it seems like Halloween "shaming" is catching on, like in the case of the mom who put up a poster chastising the person who stole her son's pumpkin. But, is this version of shaming going too far – and getting too personal?

The people commenting on the WXYZ article thought so, even calling it bullying and hurtful to kids.

"What a terrible person. I can't believe she is going to be allowed to bully kids!" JenniferHarrington wrote. "Pass out sugar-free candy or fruit! Instead she intends to scar some innocent children for the rest of their lives."

CollenJacobsPersinger agrees. "So non overweight kids (in her eyes) should rot their teeth out instead?" she questions "Wow that's better!!! Oh please … let kids be kids. If she feels likes some kids are overweight then pass something else out that is non-sugar instead. There are plenty of other options besides sending out a letter like this."

One commenter suggested the North Dakota resident get ready for backlash.

"This woman will need to hire a football stadium crew to clean the eggs and toilet paper off her house on Thursday… and I wouldn't blame the kids," ShelleyGoodge wrote. "Since she deems herself fit and in a high judge seat, she should appreciate the opportunity to exercise her elbow grease."

What would you do if your child received this letter? Would you be mad? Insulted? Do you agree or disagree with this woman?